On September 20th Mexico City again became the epicenter of Fintech entrepreneurship in Latin America thanks to FINNOSUMMIT, an event that has positioned itself as a reference for the sector in Latin America that convened more than 500 people. This third edition shows the growing interest for Fintech in the region, registering a 40% increase in attendance compared to last year. “FINNOSUMMIT has grown from being a small gathering among friends to becoming a benchmark for the Fintech ecosystem in Mexico and the region, being able to attract banks, entrepreneurs, VC investors  and government, among many other ecosystem stakeholders. This represents the consolidation of the Mexican Fintech ecosystem as the largest Fintech startup hub in the region”, said Fermín Bueno, partner of Finnovista, organizer of the event.

The event highlighted hyper-innovation that the Fintech startups are bringing to the financial services industry and how this is changing the balance of power in the industry, as already demonstrated by consolidated Mexican startups like Prestadero, Kuspit and Konfío. At the same time, traditional financial institutions have recognized that the super speed of innovation, promoted by Fintech, is threatening its dominant position, resulting in a need to build collaborative relationships with Fintechs in order to evolve.

In this sense, both global financial institutions such as BBVA, and Mexican industry players such as  as Banregio and Gentera, presenting at the event, highlighted that they are already deploying collaborative innovation programs with Fintech startups where this lasting and friendly relationship manifests itself through alliances, partnerships, investments or acquisitions. But in order to succeed, it is essential that banking evolves, changing its corporate culture and learning new ways of collaborative innovation. As Juan Mazzini from Celent said: “innovation is no longer a luxury for a select few, but rather a need for many to survive.”

Additionally, it was highlighted that Fintech startups are a gateway to hyper-innovation for the industry, but they don’t all have the ability  to scale, and at some point they will require collaborating with banks in order to take advantage of traditional financial institutions. 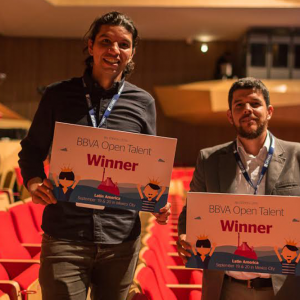 Similarly, it was also confirmed that the Fintech in Latin America is very closely tied to financial inclusion. Miguel Herrera from Quona Capital highlighted that there are few Fintech segments in the region don’t touch on financial inclusion, which shows the unique ability of Fintech to help eradicate financial exclusion, something not achieved by traditional industry players so far.

The event welcomed 25 speakers, all of whom are experts or practitioners in Fintech and innovation in financial services worldwide, such as Paul Ahlstrom from Alta Ventures, Eric Rosenthal from Abra, Enrique Majos from Gentera, Manuel Rivero from Banregio, Barry Silbert from Digital Currency Group, Bill Cilluffo from QED Investors, Brayan Peralta from VISA, Francisco Meré from Bankaool, Nektarios Liolios from Startupbootcamp FinTech, Rodrigo Ocejo from Kuspit and Hugo Najera from BBVA, among others.

One of the highlights of the event was the pitch competition among startup finalists from BBVA Open Talent 2016, the global Fintech startup competition that chose the most innovative Fintech startups in the region. Kobra from Mexico and Alegra form Colombia were selected winners this year.

A special thanks to…

FINNOSUMMIT was made possible thanks to the support of BBVA, FiinLab powered by Gentera, Banregio, Bankaool, Silicon Valley Bank, IZA Business Centers, British Embassy in Mexico, Latinia, Afluenta, Openpay and Fundación Capital, among other organizations committed to Fintech entrepreneurship in region.

These are just some examples of the ideas that we heard during FINNOSUMMIT, we will be sharing videos of all event content very soon, through which you will be able to relive the best moments of the event.

Do you want to be informed of all the newness of FINNOSUMMIT?

Follow us through our Twitter channel @FINNOSUMMIT in order to stay informed of all details of our upcoming events.