Fintech activity in Latin America strengthens and reaches 18 countries
1166 Fintech startups have been identified, a growth of 66% compared to 2017

The data on the second edition of the study Fintech en América Latina 2018: growth and consolidation run by the Inter-American Development Bank (IDB) and Finnovista could not be more positive: 1166 Fintech startups have been identified in the region reflecting a 66% growth compared to the first measurement run by both institutions in 2017. The evolution and progress in relation to past year’s analysis are described in this report, along with new dimensions relevant to the ecosystem.

The report also highlights that two out of three ventures are already in advanced stages of development and that  Fintech activity grew from 15 to 18 countries over the last year. Brazil is the country with the most ventures in the region, 380,  thereby continuing the previous year’s trend, followed by Mexico with 273, Colombia with 148, Argentina with 11 and Chile with 84.

Furthermore, one out of three companies declares to have internationalized their activities.  “Even though 86% of the Fintech companies are located in only five countries, ventures have been found in every Latin American country as well as a strong proclivity towards internationalization, which demonstrates the opportunities perceived by entrepreneurs as well as the importance of further developing a regional harmonization and dialogue” says Juan Ketterer, Chief of the Connectivity Markets and Finance Division of the Inter-American Development Bank (IDB). 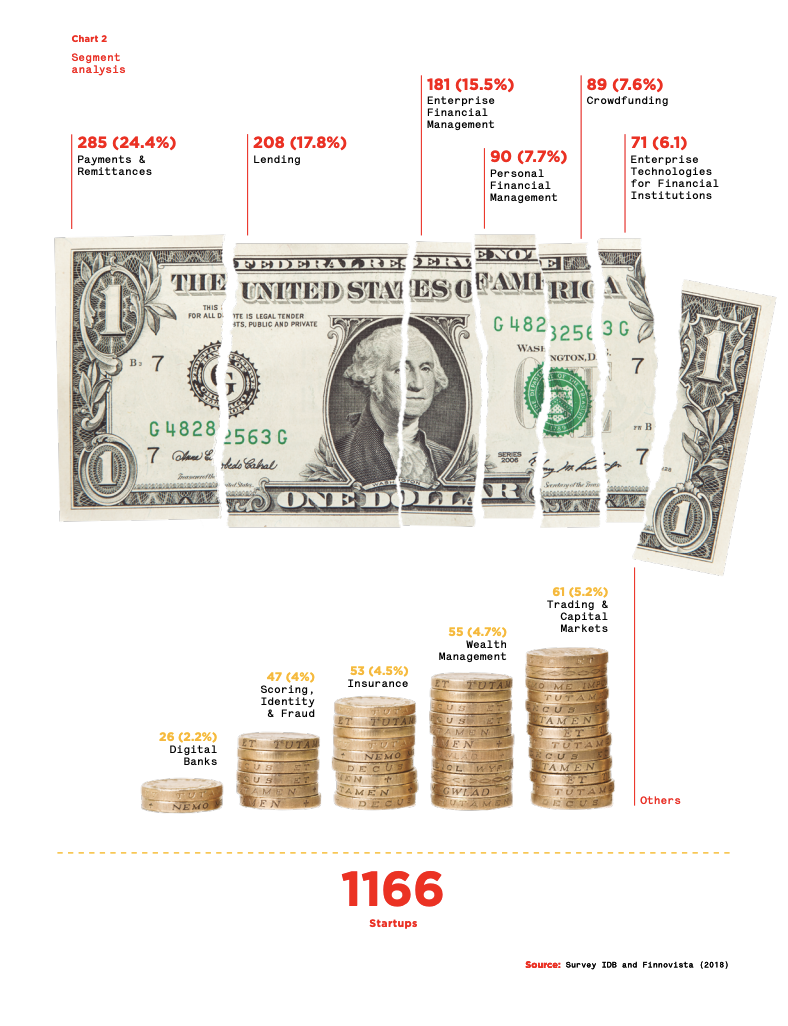 Payments and remittances remain the main segment with 24% of the identified companies, followed by loans (18%) and Enterprise Financial Management (15%). A rapid growth of the Digital Banking segment and the Credit Scoring, identity & fraud segment should also be noted.

“The growth and maturity undergone by the Latin American Fintech ecosystem over the last year are huge” reckons Andrés Fontao, Managing Partner of Finnovista. “Big international investors, including the Asians, are already targeting the Fintech opportunity and the first regulatory frameworks for Fintech are also being adopted by some governments in the region.”

The leading role of regulation in the ecosystem development is endorsed by the startups surveyed since only a 9% of them consider that a specific regulation is not needed while a 35% believes it is necessary and another 35% finds their current regulation adequate, reflecting the progress made in certain jurisdictions. In this regard, the report draws attention to the progress reached through the dialogue between regulators and the industry. 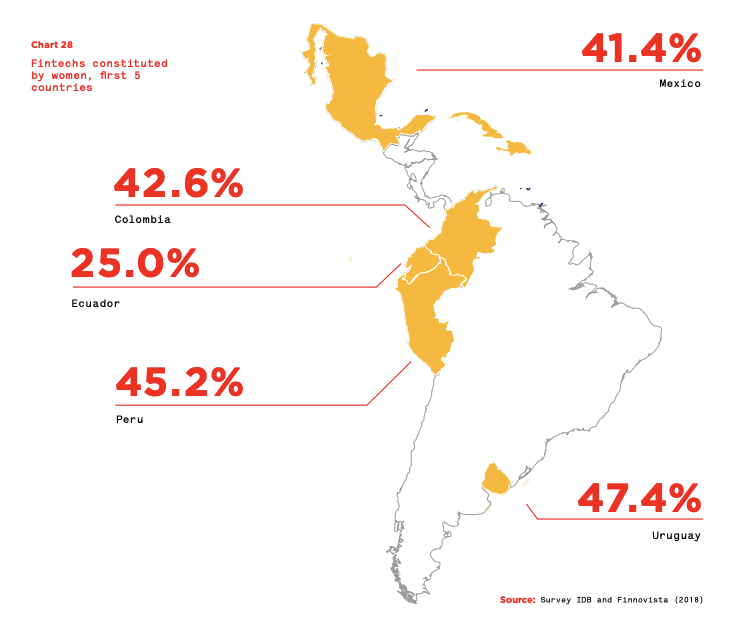 The study also presents the first regional analysis in gender and Fintech, examining the role of women in the industry both as a founder of Fintech companies, as an employee and as a user of Fintech services. “We have observed that 35% of Fintech companies in Latin America have a female founder or at least one woman in their founding teams, well above the global average of 7%”, emphasizes Gabriela Andrade, Financial Markets Lead Specialist at the IDB. “While Fintech companies with women in their founding teams work in various segments, it is interesting to point out that, one out of three of these companies, focus in servicing excluded and underserved segments of the population”.

The data revealed in the 140 pages of this study show the challenges that the industry is currently facing while reflecting the unstoppable transformation of the financial sector as well as the entrepreneurs’ role in accelerating innovation.

We kindly invite you to download the full report in English version by clicking on the button and to discover the second edition of the greatest information gathering on Fintech in Latin America up to now.

The Inter-American Development Bank aims to improve lives. Founded in 1959, the IDB is one the main long-term funding sources for economic, social and institutional development in Latin America and the Caribbean. The IDB also carries on cutting-edge investigation projects and offers counseling on politics, technical assistance, and training to public and private clients across the region.