188 new Fintech startups have been launched in Brazil in the past 18 months, positioning the country as the largest Fintech hub in Latin America driven by a strong growth in the segments Digital Banking, Trading & Capital Markets, Lending and Insurance

The wave of transformation in the financial services system has spread to every corner of the world and, as we have seen in past research, Latin America has not been immune to this trend. The region is leveraging new technologies to exponentially improve people’s access to financial services.

On this occasion, we have conducted a new edition of the Fintech Radar Brazil in collaboration with the Inter-American Development BankandFinnovation. The previous edition of the Fintech Radar Brazil was published in November 2016 by Finnovista. We have currently published studies on Argentina, Brazil, Chile, Colombia, Ecuador, Mexico, Peru and Spain, as well as specific studies about Foreign Startups in Latam, and Fintech for Inclusion Radar. The creation of different Fintech Radars about the Fintech ecosystems aims to create an extensive source of information about Fintech entrepreneurships, assess the evolution of the sector in the region and provide visibility to a trend that will lead the region into an era of of inclusive and ubiquitous digital finance. 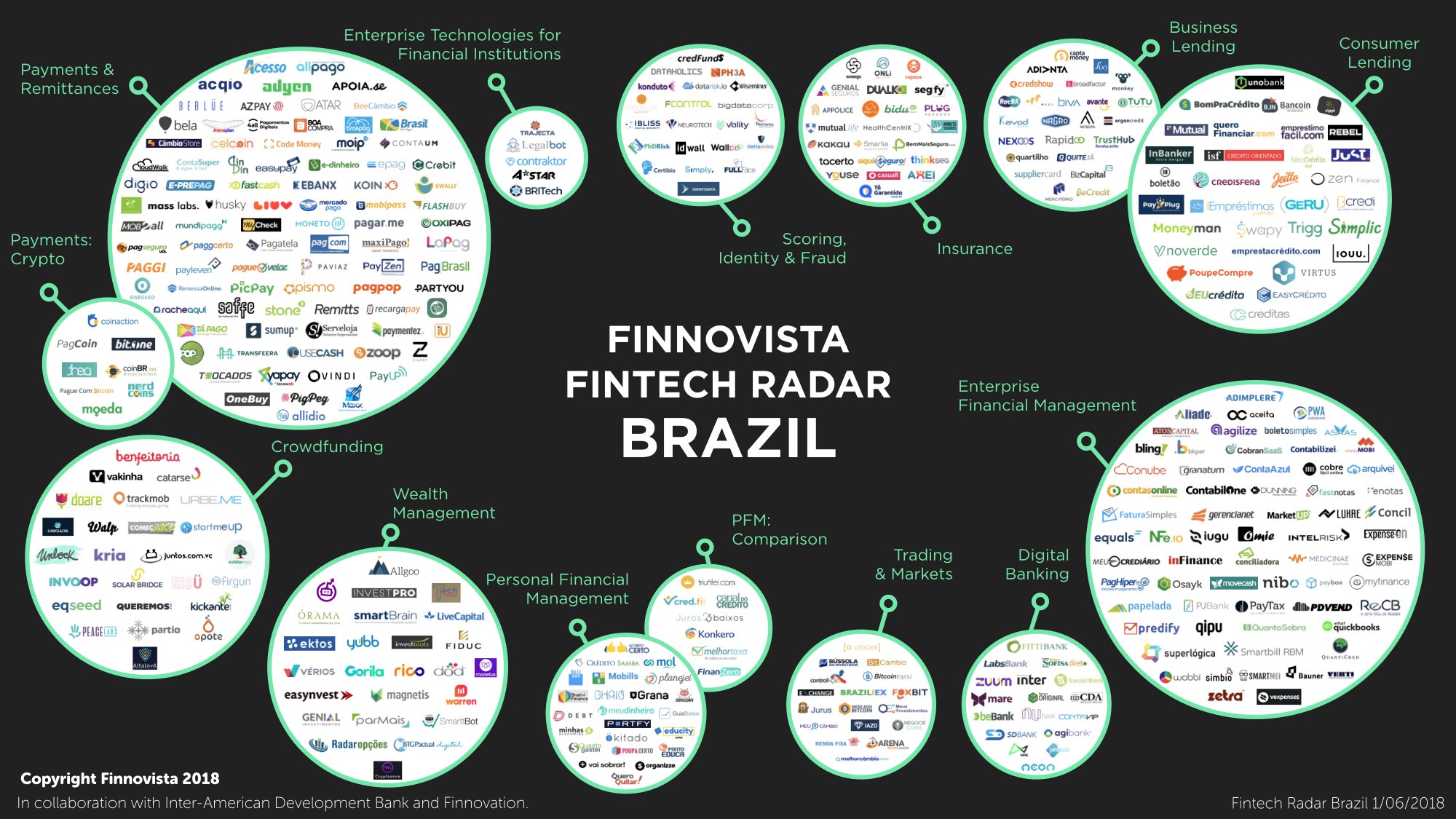 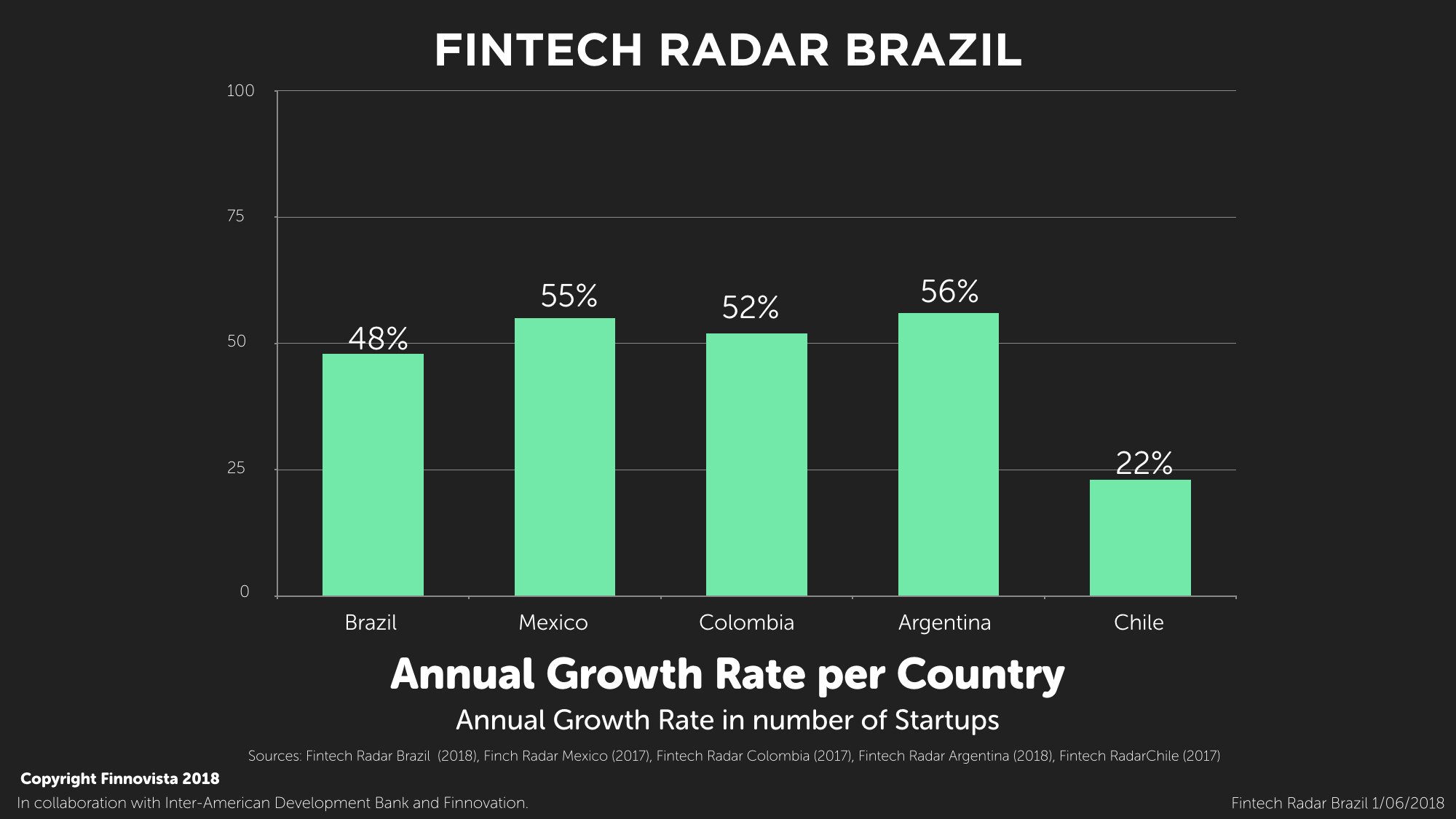 When comparing the annualised growth rates in Brazil with the main Fintech ecosystems in the region, we observe that the largest ecosystems, Brazil, Mexico, Colombia and Argentina have undergone similar growth rates of approximately 50%, except for Chile, where the Fintech sector grew by 22%.

Brazil’s banking system is known as one the most bureaucratic systems in the world, with the five largest banks in the country (Itáu Unibanco, Banco Santander, Banco Bradesco, Banco do Brasil and Caixa Econômica) owning 80% of market share in the credit market. As a result, consumers often find themselves with very negative customer experiences, significant barriers and impediments, such as extremely high annual percentage interest rates, which can go up to 450%. This positions Brazil as one of the countries with the highest interest rates in the world, behind only Malawi and Madagascar. However, this concentration of power and its subsequent oligopolistic market, leaves Brazil’s financial system in a more susceptible position to be disrupted by the Fintech innovation. In addition, Brazil has a high smartphone penetration and considerable levels of Internet access, which represent an opportunity for the development of financial services technology. In 2017, mobile penetration in Brazil reached 138%, above the global average of 115%. Mobile banking transactions also doubled in one year, accounting for 34% of total transactions made in 2016. If these trends continue, it is estimated that the Fintech sector in Brazil could generate potential revenues of up to $24 billion in the next 10 years. 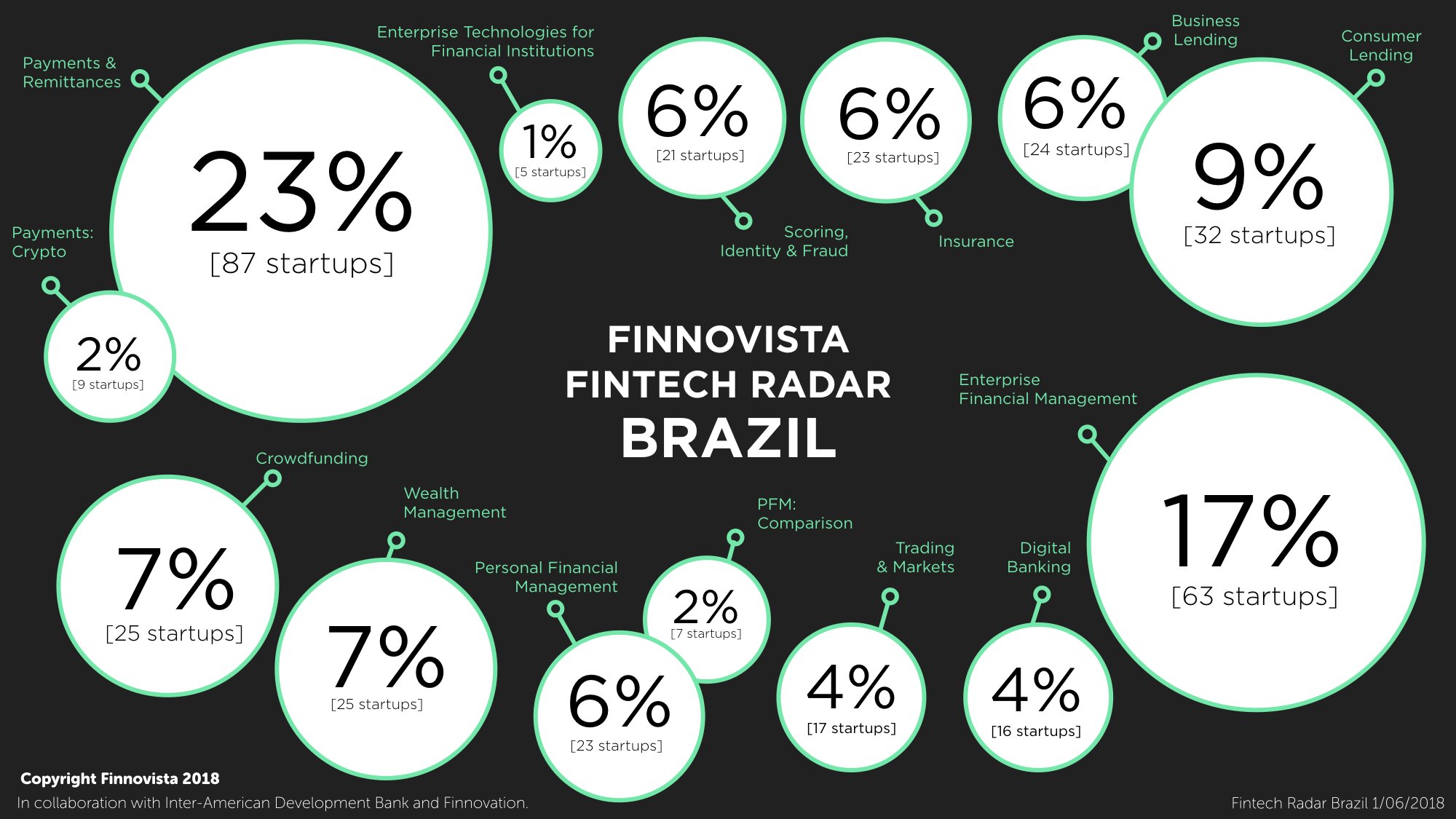 The following five emerging segments are all under 6% of the total number of startups identified in this study.

As compared to the previous edition of the Fintech Radar Brazil, we see few major changes regarding the main segments of the country’s ecosystem. The same key segments maintain similar proportions of the total number of startups. 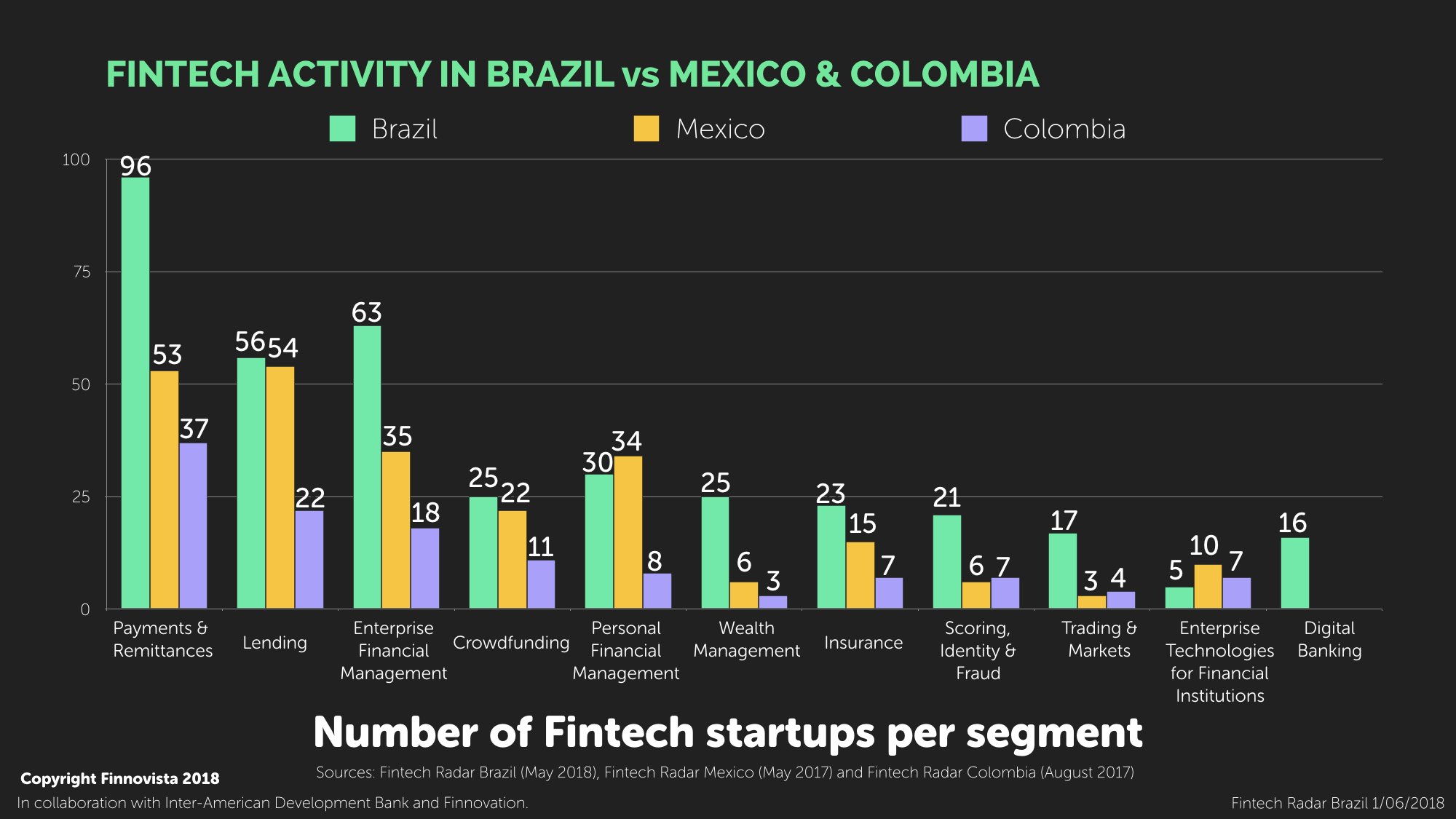 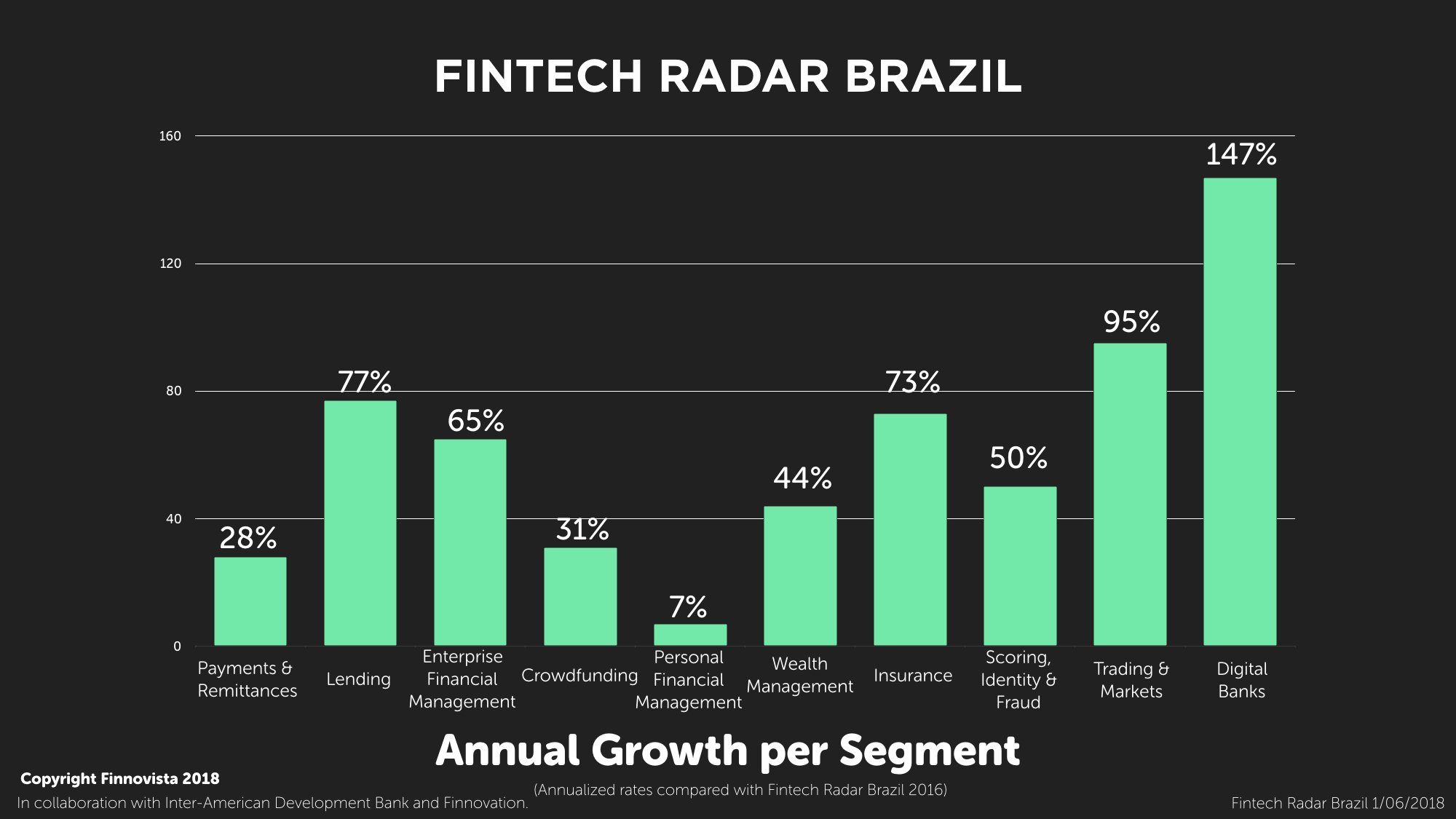 If we compare this distribution with the other two main Fintech ecosystems in Latin America (Mexico and Colombia), we see how the three countries share Payments and Remittances, Lending, and Enterprise Financial Management as the three largest Fintech segments, however, there are nuanced differences in ranking. Specifically, the Lending segment is the largest segment in Mexico and the second in Colombia, while in Brazil it holds third position. This situation has been strongly influenced by current regulatory restrictions in Brazil’s lending segment, as electronic lending platforms are not authorized to act as an intermediary between borrowers and lenders, an activity limited to financial institutions.

It is worth noting the strong growth undergone particularly by the segment of Digital Banks, which increased 147% from 5 to 16 startups, and the segment Trading & Markets, which grew by 95% from 7 to 17 startups.

The existence of 16 Fintech startups offering digital banking services in Brazil highlights the inefficiency of the traditional Brazilian banking system in attracting and retaining new generations, as well as the growing importance of mobile technologies for the Brazilian population when conducting banking transactions.

This scenario is exemplified by the success stories found in Brazil regarding this segment, such as Nubank, a Brazilian startup that has grown from 1.3 million customers by the end of 2016 to 3 million customers by the end of 2017 and that has already received $330 million in external funding since 2013. The Central Bank of Brazil claims to be pushing for the Fintech ecosystem due to its capacity to drive competitiveness and, therefore, the development and maturity of the overall financial ecosystem in the country. In this regard, traditional banks have seen themselves forced to react and adopt digitalization strategies to maintain a competitive position in the market. Last year Banco Bradesco launched its own digital franchise, Next; Itaú and Bradesco launched their own Fintech accelerator; and recently Santander Innoventures announced its investment in the Series C round of Creditas, the largest online lending platform in Brazil.

A further sign of the boiling point that the Fintech ecosystem has reached in Brazil is the growth of over 20% witnessed over the last 18 months by all Fintech segments except one, Personal Financial Management, which has grown 7%. In particular, it is worth highlighting the growth experienced by the following segments: Lending (77%), Insurance (73%) and Enterprise Financial Management (65%).

In order to carry out a more in-depth analysis about the Fintech ecosystem in Brazil, a survey was conducted with 189 Fintech startups in the country regarding different business aspects.

The information gathered identifies Sao Paulo as the city where the majority of Brazilian Fintech startups have been founded, with mention as their city of origin by 71%, followed by Rio de Janeiro at 8%, Belo Horizonte with 5% and Porto Alegre with 4%. Regarding internationalisation, 70% of companies claim to be operating only in Brazil, while 30% confirmed operations beyond national borders. We find higher rates of internationalization in Brazil in comparison with the second largest Fintech ecosystem in the region, Mexico, where only 10% have expanded internationally, although Brazil is still far behind the 48% seen in Argentina, the largest internationalisation rate in the region. 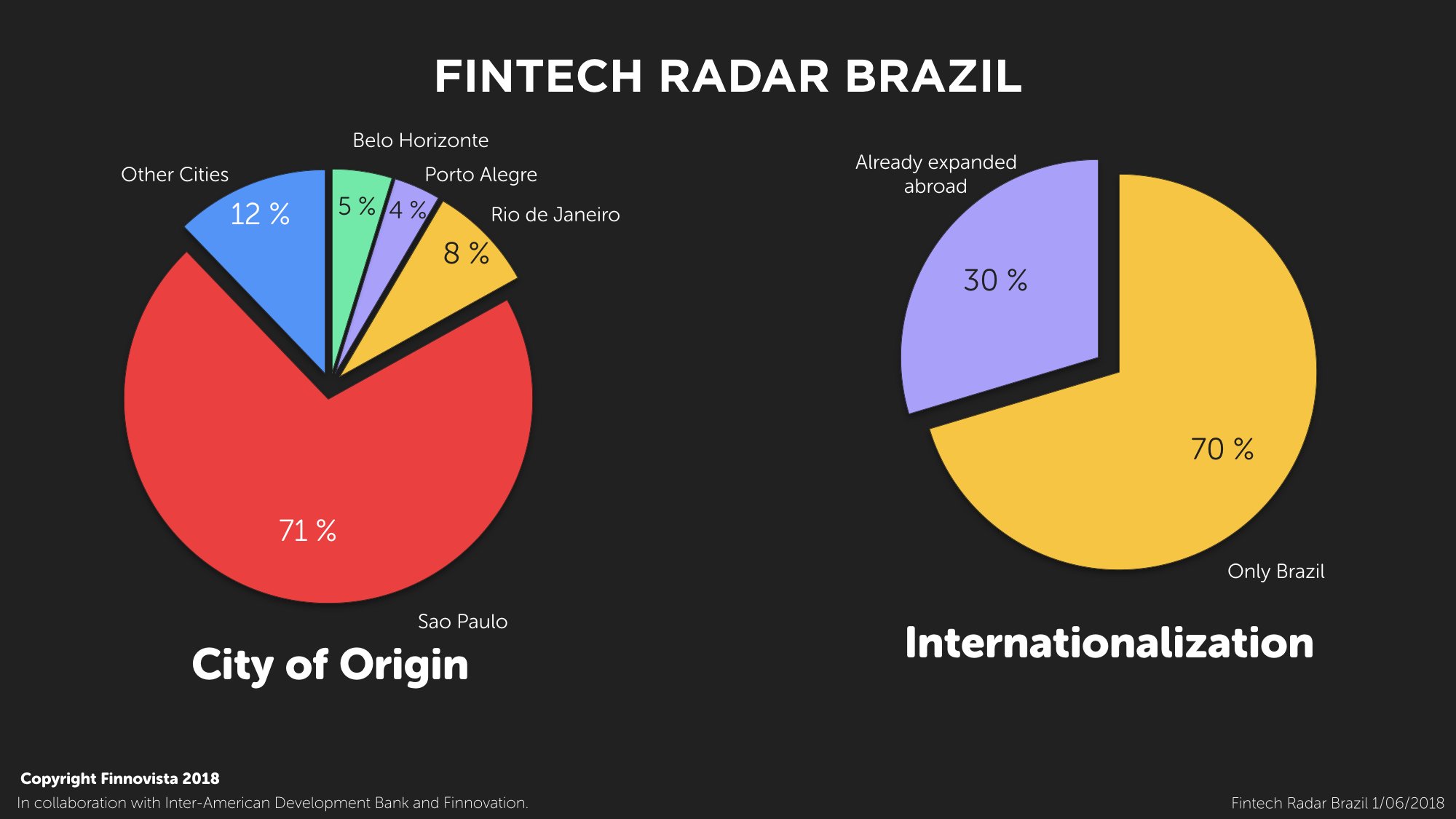 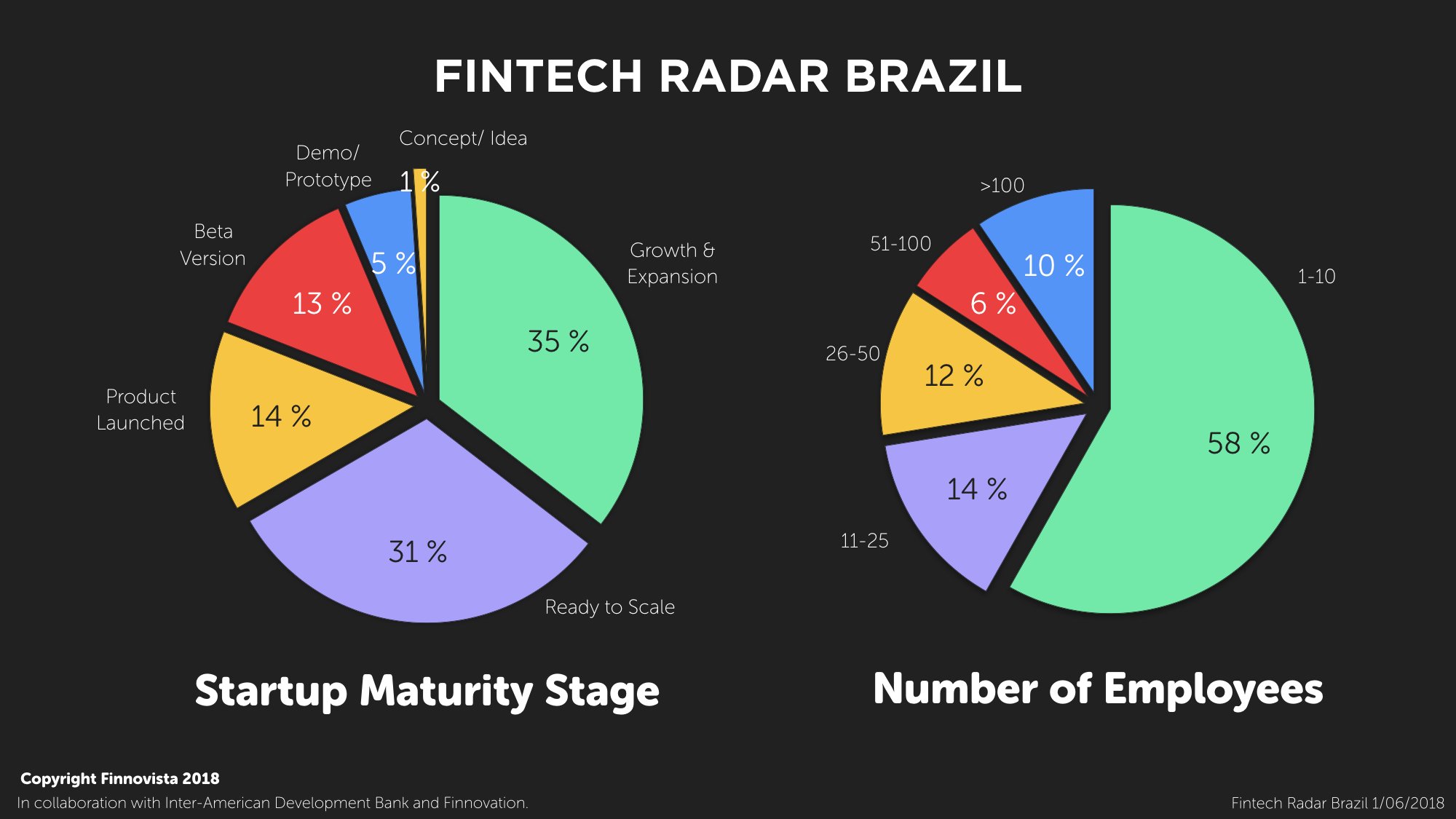 Regarding the maturity stage of Fintech startups in Brazil, 35% of them claim to be in Growth and Expansion stages, while 31% say they are Ready to Scale, leaving the remaining 33% of Brazilian startups in early stages. This maturity level is similar to the scenario found in Mexico’s ecosystem, where 61% of Mexican Fintech startups belong to these two mature stages (Growth and Expansion and Ready to Scale), although the percentage of startups that are Ready to Scale is slightly higher in Mexico than in Brazil, at 39%.

Despite the mature level of the majority of startups in Brazil’s Fintech ecosystem, most of the startups that answered the survey are still small in terms of number of employees, as 58% claimed to have between one and ten employees. Only 10% said to have over 100 employees, while in Mexico this figure totaled 35% of the Fintech startups in the country. 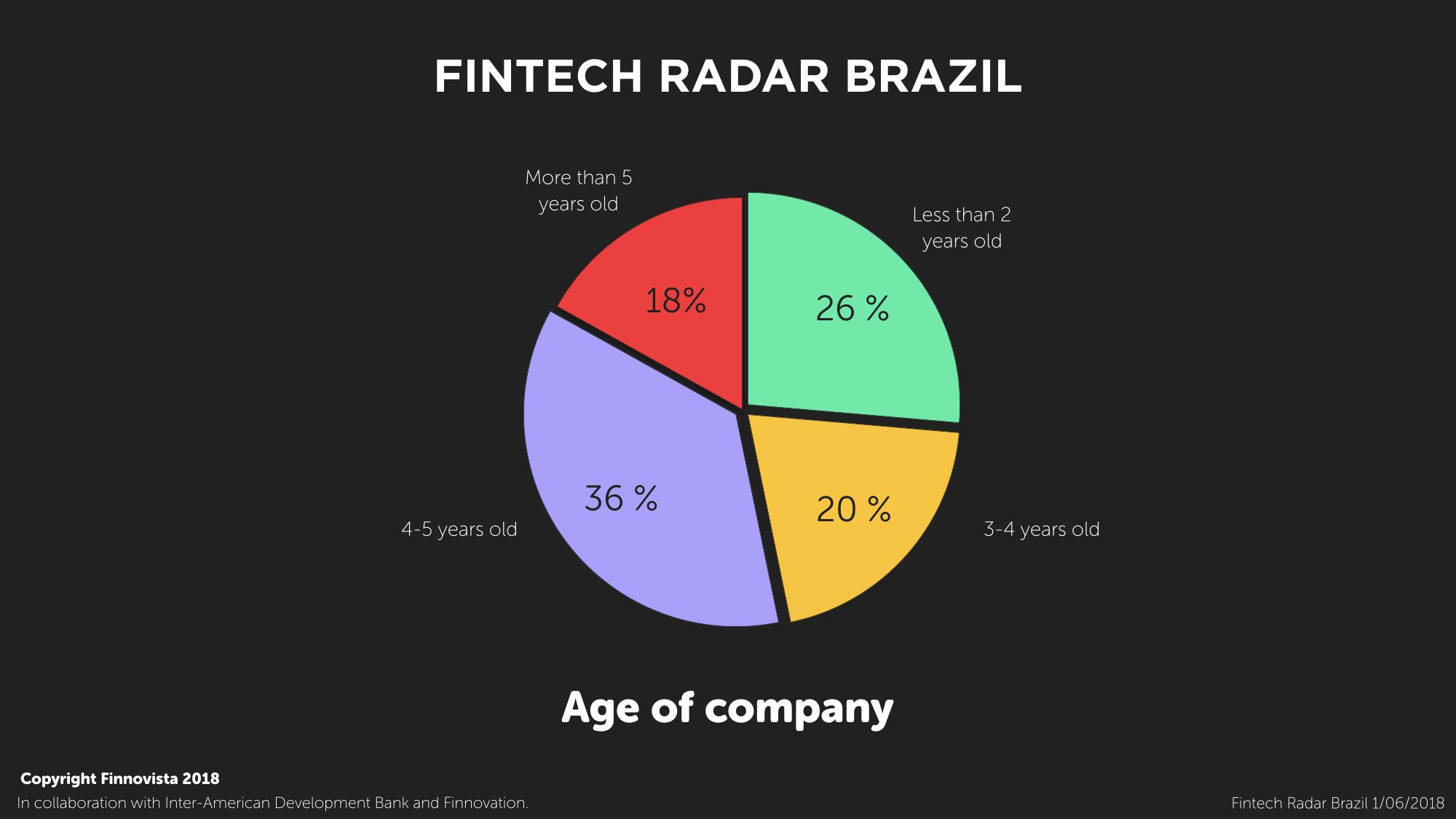 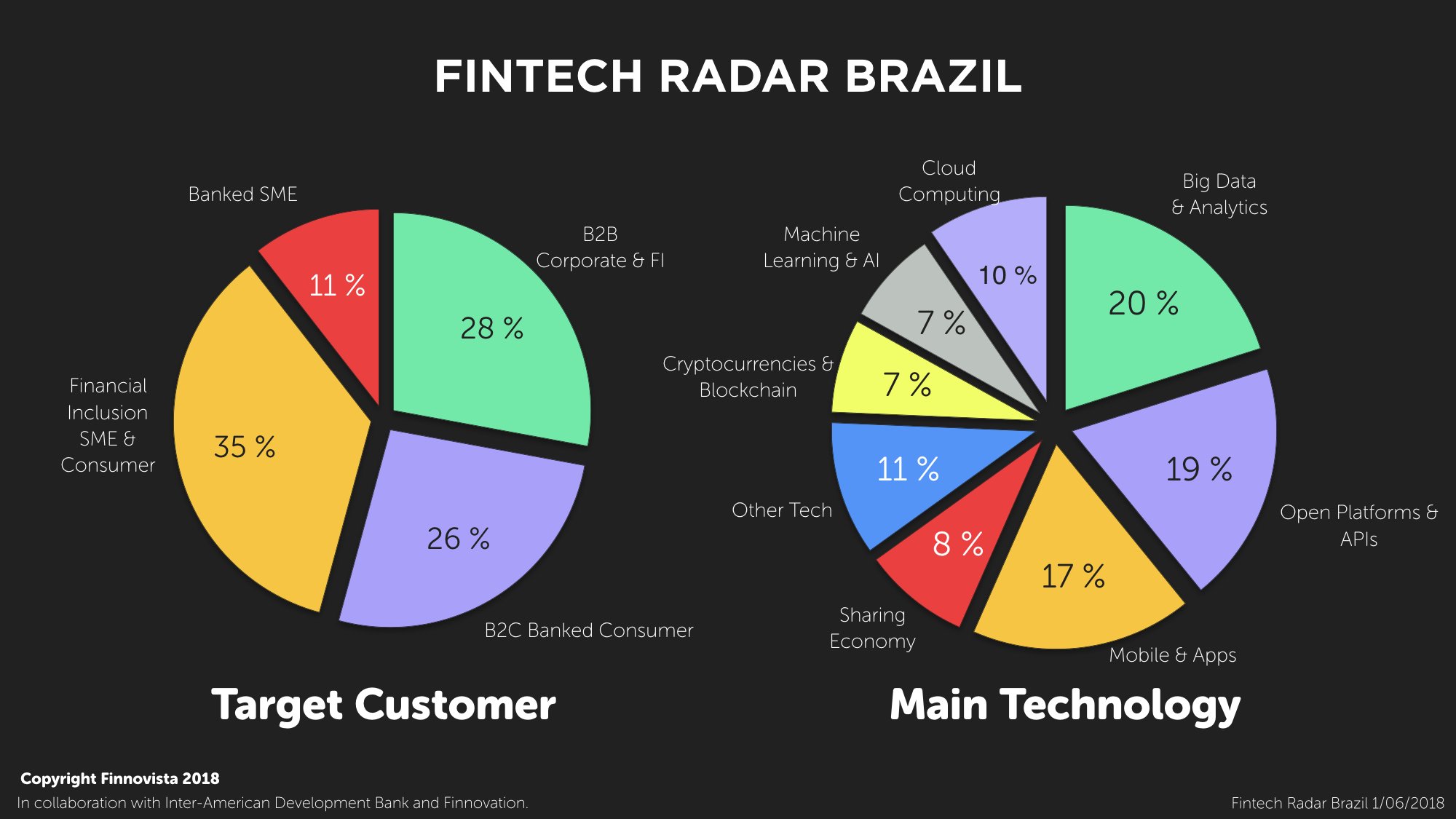 When asked about the main technologies used to create their products and services, the three most common technologies used by Brazilian Fintech startups were: Big Data and Analytics (20%), APIs and Open Platforms (19%) and Mobile and Applications (17%). The high proportion of solutions oriented towards open banking in Brazil, as has happened in other countries like Argentina, is signal of this collaboration that is beginning to build between startups and corporates and that, according the Inter-American Development Bank, positions itself as one of the key factors to satisfy the new needs of the market.
In terms of funding received, 67% of Fintech startups in Brazil claimed to have received external funding in the past, and out of the 89 startups that agreed to unveil the amount received, 57% have received under one hundred thousand dollars, while only 13% claimed to have received over one million dollars. This is less than Mexico, where 16% of the Mexican Fintech startups that responded to the survey reported receiving over one million dollars. 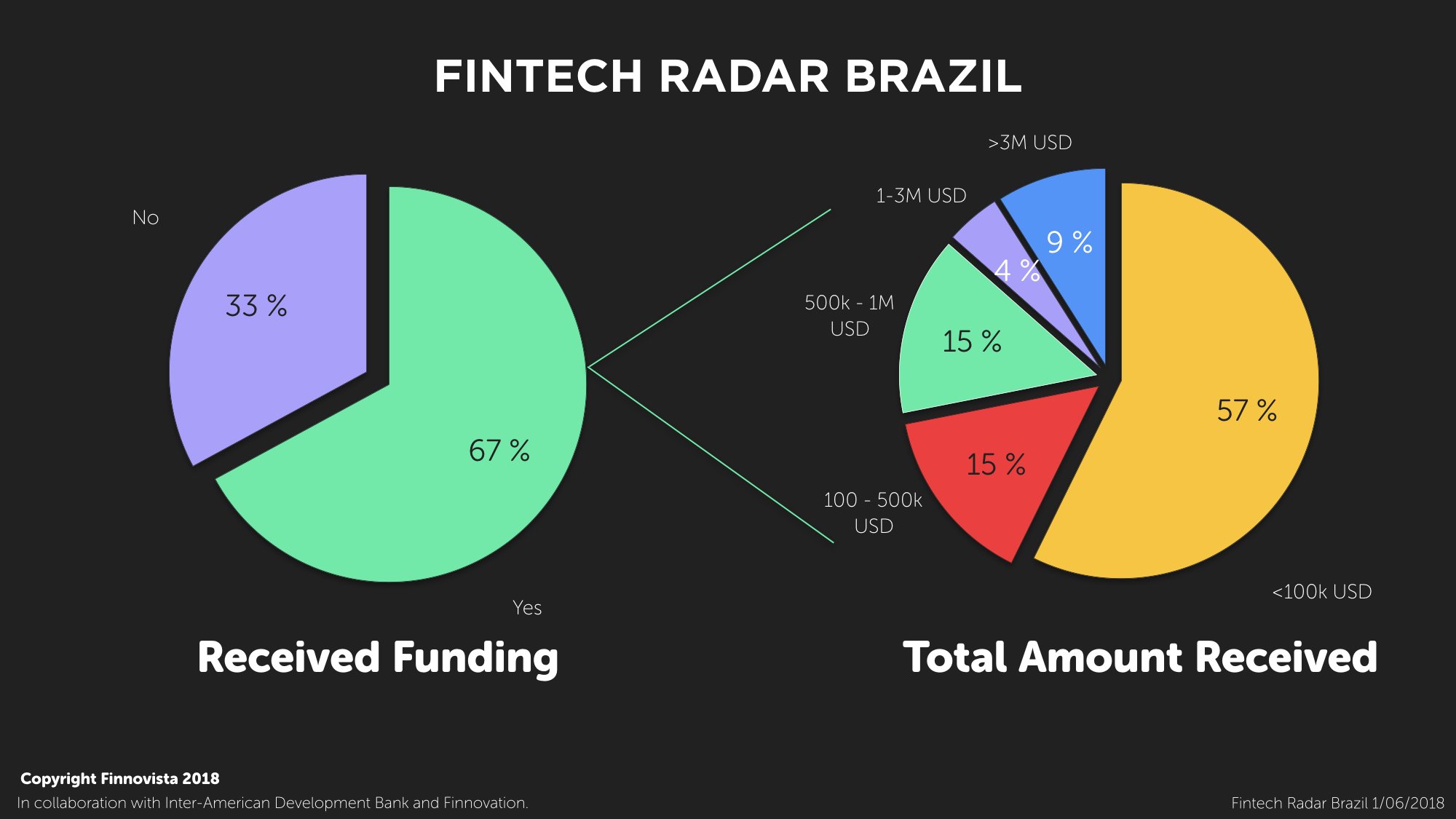 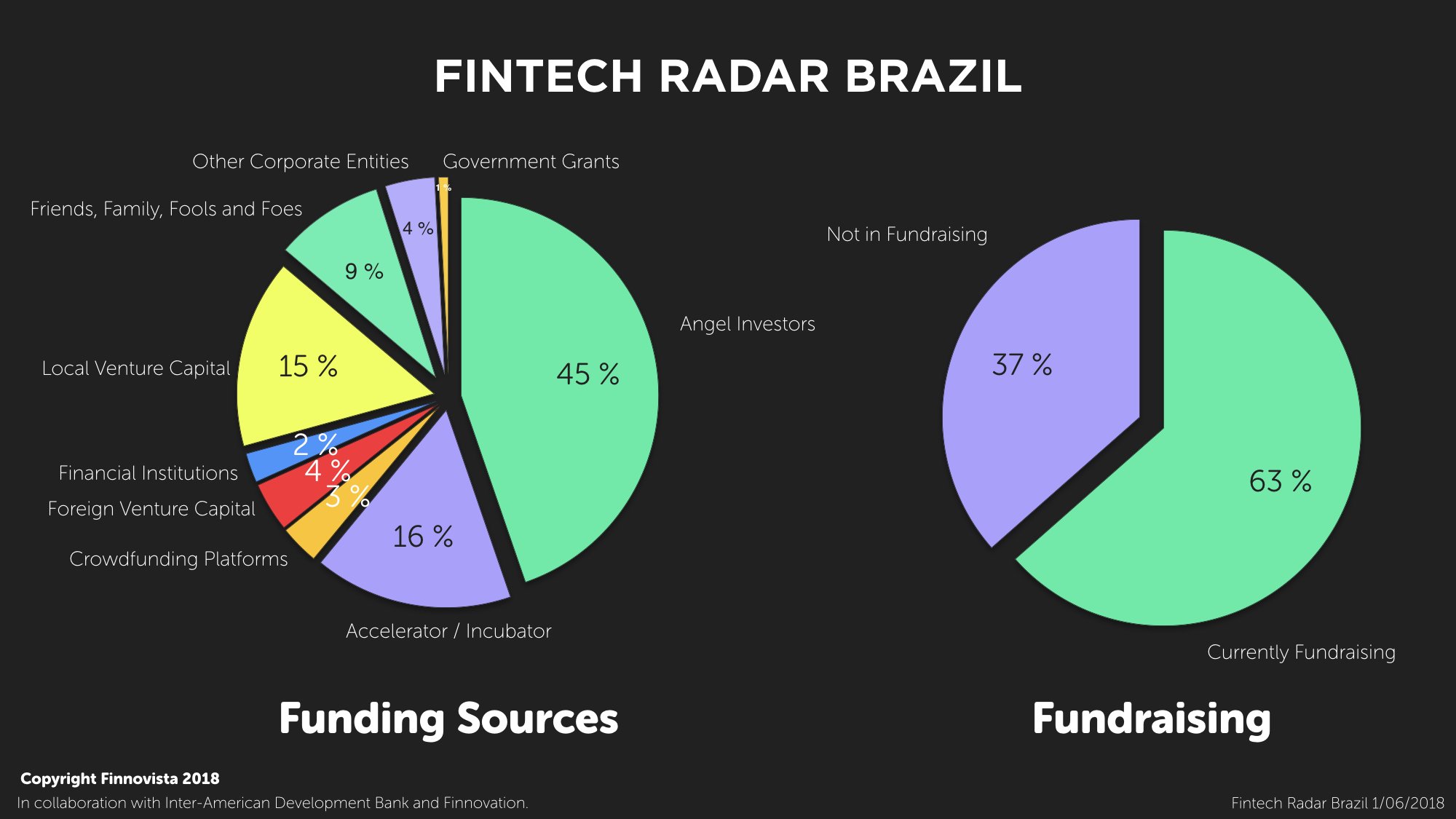 When identifying the main funding sources among Brazilian Fintech startups, angel investors become the most important funding channel, as 45% of the startups that agreed to share this information have raised funding through these means. Funding raised from accelerators and/or incubators are the second largest funding source, with 16% of startups raising funding from them. This showcases the importance of these initiatives that look to support startups economically as well as in the development of their business models. Lastly, it is also worth noting the importance of local Venture Capital firms in Brazil’s Fintech ecosystem, from which 15% of Brazilian startups claim to have raised funding.

Lastly, when asked about their funding plans, 63% of Fintech startups in Brazil expressed they are currently looking for funding, reflecting the importance of success in fundraising to the development of Brazil’s Fintech ecosystem.

Among the different factors that act as a barrier or challenge to the development of financial innovation in Latin America, the inadequacy or absence of regulation tend to be a general cause. In Brazil’s case, the financial services sector is highly regulated, which on many occasions presents a barrier for startups when getting a project started and having to compete with large banks that control the market. For example, current regulation in the country prevents lending digital platforms to intermediate between lenders and borrowers, which has slowed down the development of this Fintech segment in the country. However, as Octavio Damaso, director of the Central Bank of Brazil, pointed out, “a new regulation would lead to a further development of the ecosystem within a legal framework”.

In August 2017, the BCB conducted a public consultation proposing specific regulation oriented towards digital lending platforms, authorising them to conduct lending transactions by introducing two new categories of financial institutions: P2P lending companies and direct lending companies. Work is currently underway to advance with this discourse and enable it to potentially turn into new regulation for the Fintech sector, following Mexico’s example, which in March represented the first Fintech Law approved in the region, or the United Kingdom’s sandboxes, which foster financial innovation for startups without having to submit to strict regulatory constraints.

On the other hand, in the last three years Brazil has gone through one of the worst economic crisis of its history. This economic downturn, together with bureaucratic hurdles that foreign capital investment funds find themselves dealing with, discourage investments in Brazilian companies. However, during the last quarter in 2017, Brazil registered the third consecutive increase of its GDP, which grew 1.4% versus the same period the prior year. This economic relief seems to have encouraged venture capital investments in Brazilian startups, and hopefully we will see new funding rounds such as thosethat took place in 2016 like BankFacil and GuiaBolso or the recent $55million investment round in Creditas in 2018.

Overall, Brazil presents a mature Fintech ecosystem headed towards expansion and greater financial innovation. With a population of over 200 million people and high levels of mobile and technological penetration, Brazil has an economic market that can be targeted throughout further innovation and technology, which positions the country as a strong candidate to become a regional and global Fintech hub.

From Finnovista we like to thank the following collaborators that have participated in the preparation of the Fintech Radar Brazil, among them: Guilherme Horn, Hilton MenezesandDaniel Andrade.

Do you know any other Fintech startup from Brazil that has not been included in our Fintech Radar?