Finnovista has conducted different Fintech Radar reports about the most important countries in the Ibero-american region in order to create a comprehensive data source of the Fintech enterprises, evaluate the sector’s progress in the region, and give visibility and recognition to a movement that will lead the region towards an ubiquitous and inclusive digital finance landscape. So far, Finnovista has published Fintech Radar studies about Argentina, Brazil, Chile, Colombia, Ecuador, Spain, Mexico and Perú. Likewise, in May 2017 Finnovista published the most exhaustive and the only report published to date about Fintech Innovation in Latin America in collaboration with the Inter-American Development Bank (IADB).

On this occasion, Finnovista is publishing the first part of the report about Fintech innovation in Spain through an update of the Fintech Radar Spain, which its last edition was published in July 2016. In the second part, which we will publish before the end of the year, we will share a more in-depth analysis about the Spanish Fintech ecosystem, as we conducted in Colombia, Mexico and Brazil. In order to carry out this detailed analysis, we invite each of the startups included in this updated version of the Fintech Radar Spain to respond to a survey that will be sent in the following weeks and that will be published in an aggregated form, not individually. From Finnovista, we are convinced that by publishing and sharing this level of information we will contribute to strengthening the Fintech sector in Spain and in the Ibero-american region, giving visibility to new Fintech companies, connecting them with other ecosystem players and driving the sector’s growth in the country, as well as its connection with the rest of the Ibero-american region. 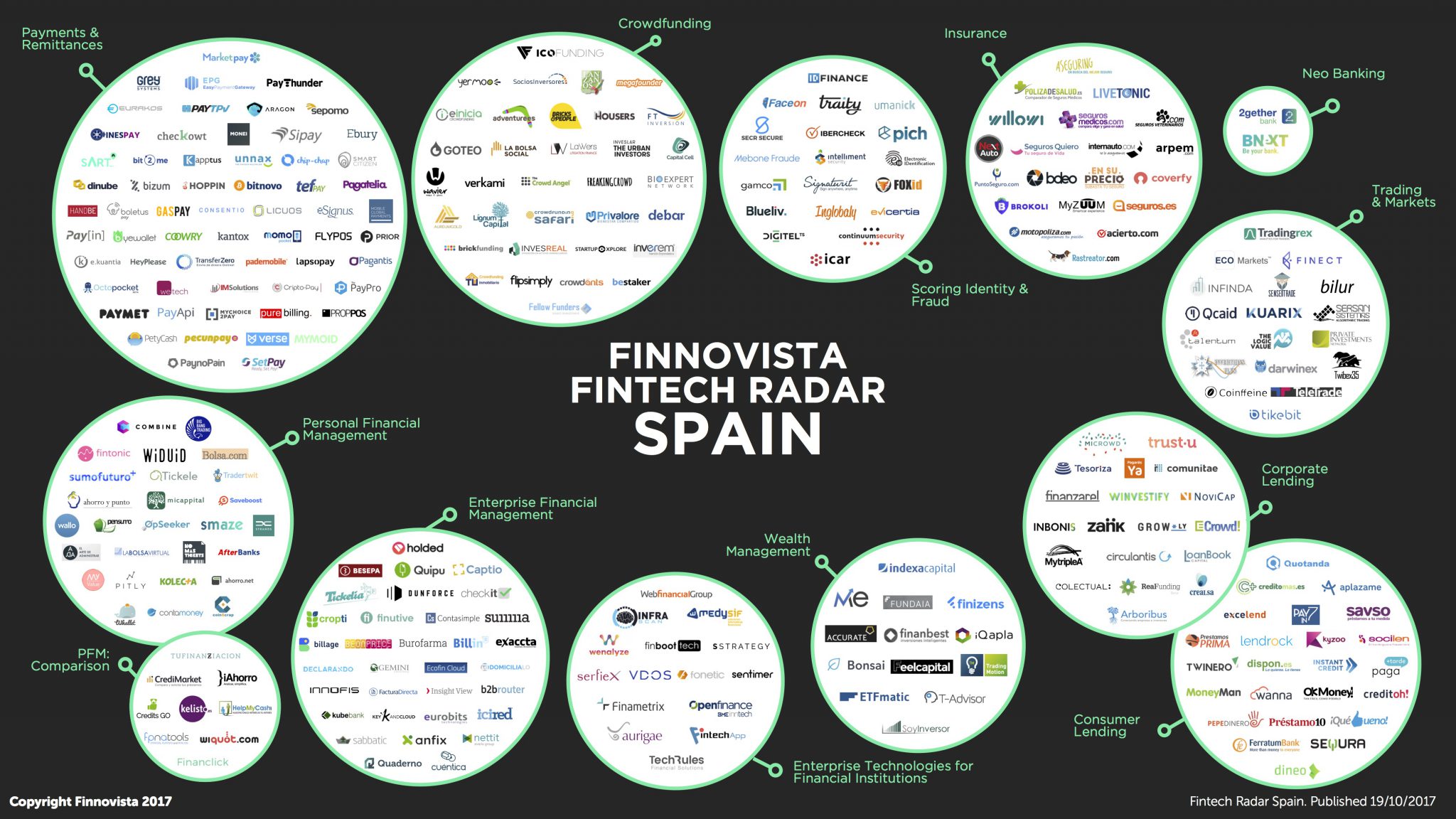 In this new edition of the Fintech Radar Spain we have identified a total of 294 Spanish Fintech startups, which represents a net increase of 41% in the past 15 months. During this period, 117 startups have been created in Spain, which represents a gross growth of 56%, compared to the 209 startups that we identified in Spain in July 2016. During these past 15 months, 32 Fintech companies have disappeared or have become inactive, 15% of the total number of startups. The dynamism observed in the Spanish Fintech ecosystem highlights the integration of multiple new specialised competitors, which offer very specific products and services within the financial industry’s value chain, all of them waiting for a balanced regulation or regulatory sandboxes that enable them to function on equal terms, as it is already happening in other Ibero-american countries, such as Mexico or Brazil.

The identified startups in this analysis are distributed among 11 Fintech segments, with five major segments in the Spanish market and six emerging ones.

The five major segments are composed by:

The six emerging segments are all under 8% of the total number of Fintech startups identified in the analysis, which include Insurance (7%), Scoring, ID & Fraud (6%), Trading & Markets (6%), Enterprise Technologies for Financial Institutions (5%), Wealth Management (4%) and Neo Banking (1%) 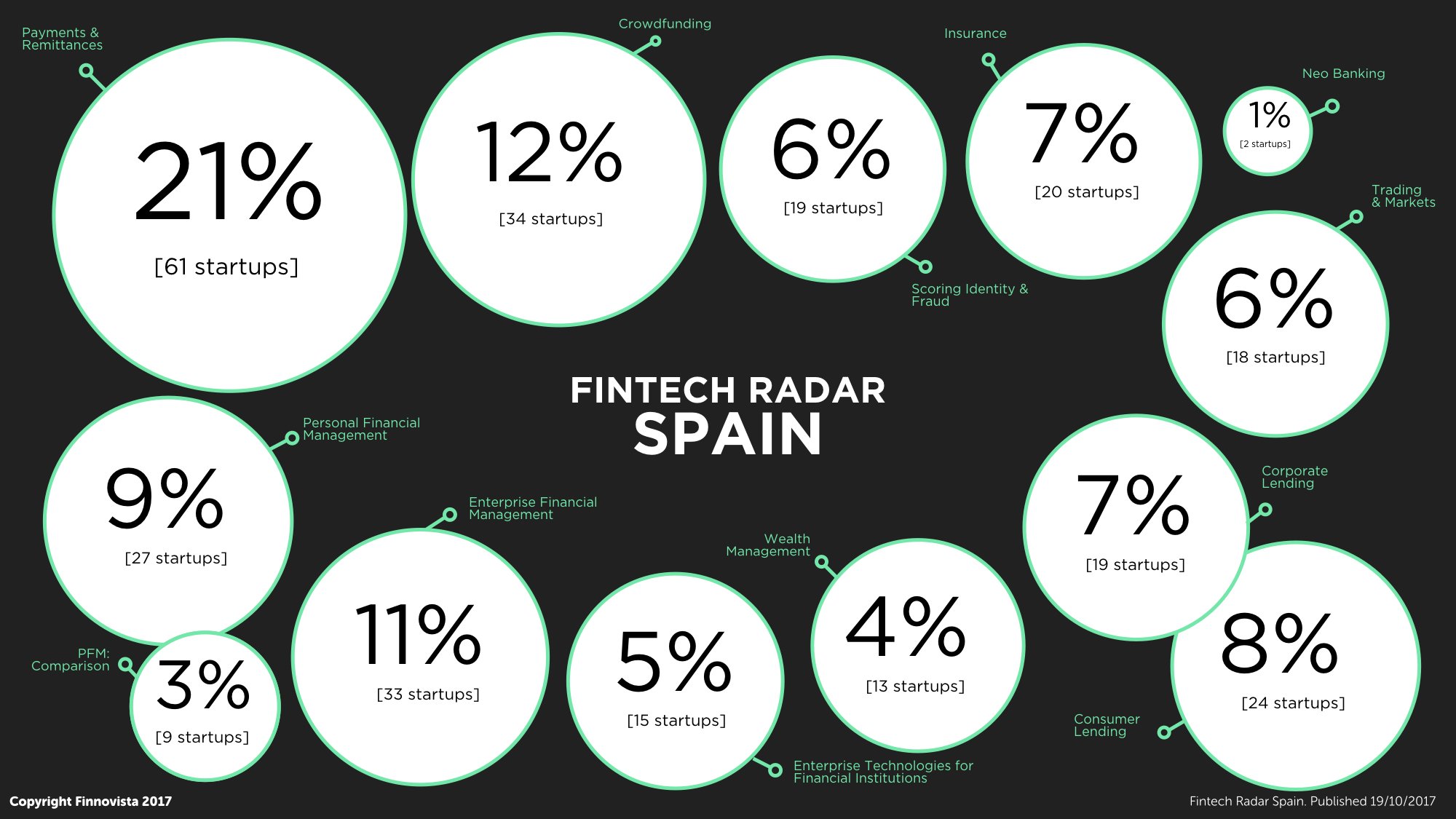 The growth experienced by the Spanish ecosystem has been driven mainly by four segments, which have grown over 50% in the past 15 months:

Distribution of solutions in the major segments

We have analysed the distribution of the Payments and Remittances segment and we observed that 44% of the Fintech solutions that make up this segment are Mobile Payments and/or Wallets, 33% offer services of Payment Gateways and Aggregators, 7% enable International Money Transfers and Remittances, while 5% are Mobile Points of Sales (mPOS) and the following 10% have been identified as “Other” payment solutions. 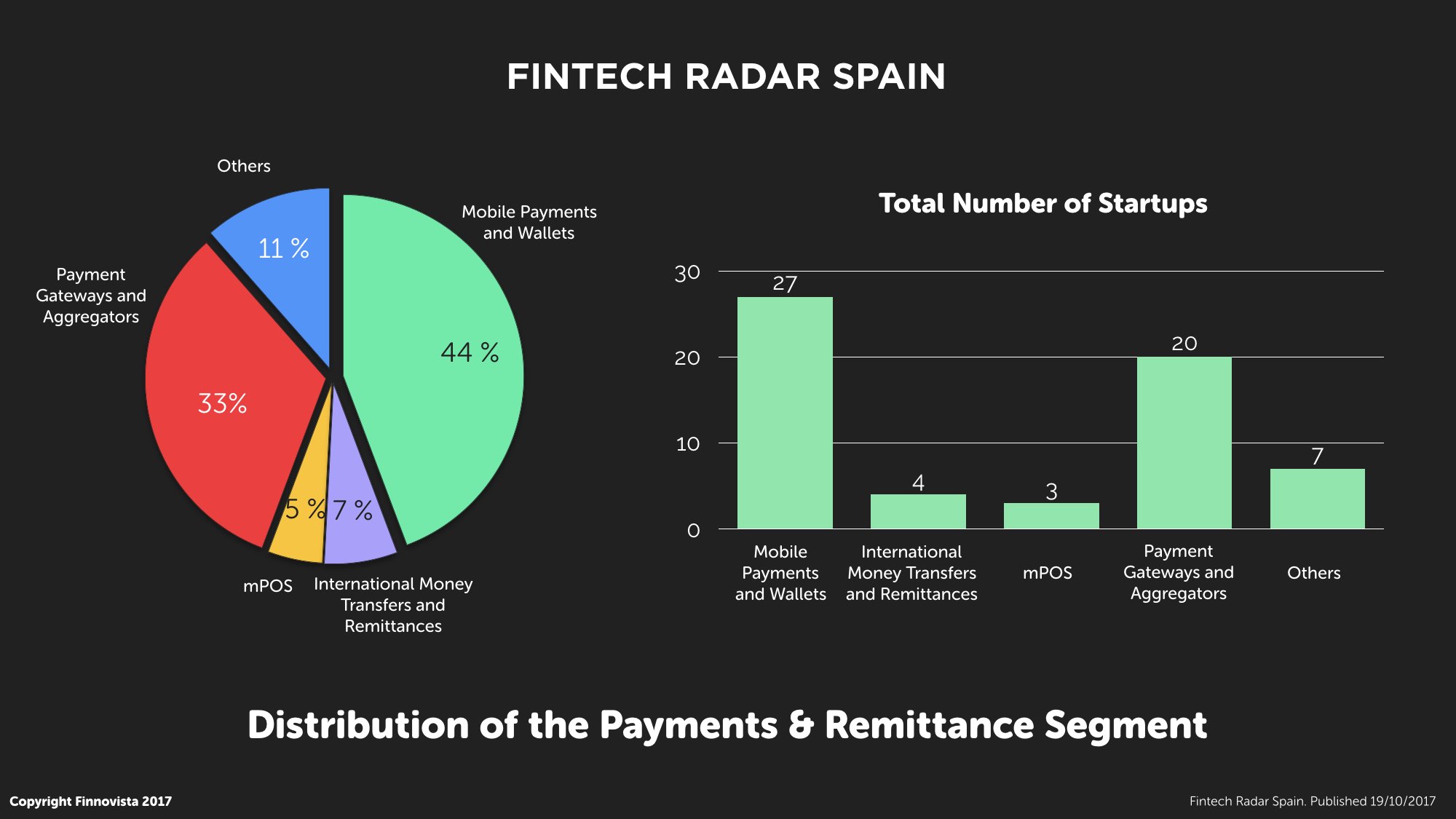 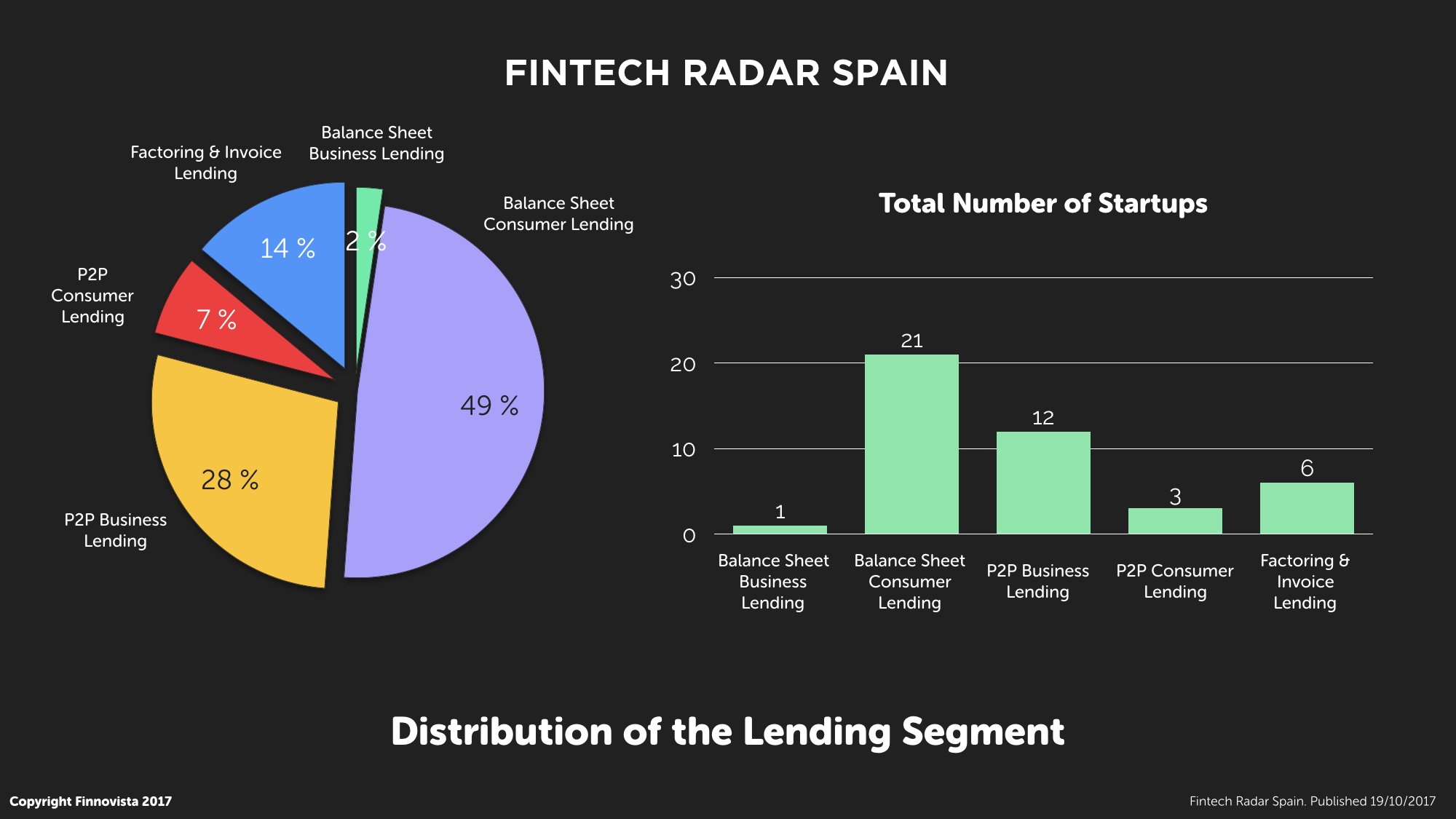 Regarding the Lending offer in Fintech, we identified that 49% of the startups providing lending services give Balance Sheet Consumer Lending, while only 2% provide Balance Sheet Business Lending. However, the Spanish business sector is looking for other lending alternatives, such as Factoring & Invoice Lending and P2P Business Lending, which represent 14% and 26% of the segment respectively. The P2P Consumer Lending represents 9% of the Lending segment in Spain.
58% of the startups identified in the Personal Financial Management segment provide Savings & Financial Efficiency solutions, 25% are Comparison Sites of financial products and the remaining 17% are Financial Education tools. 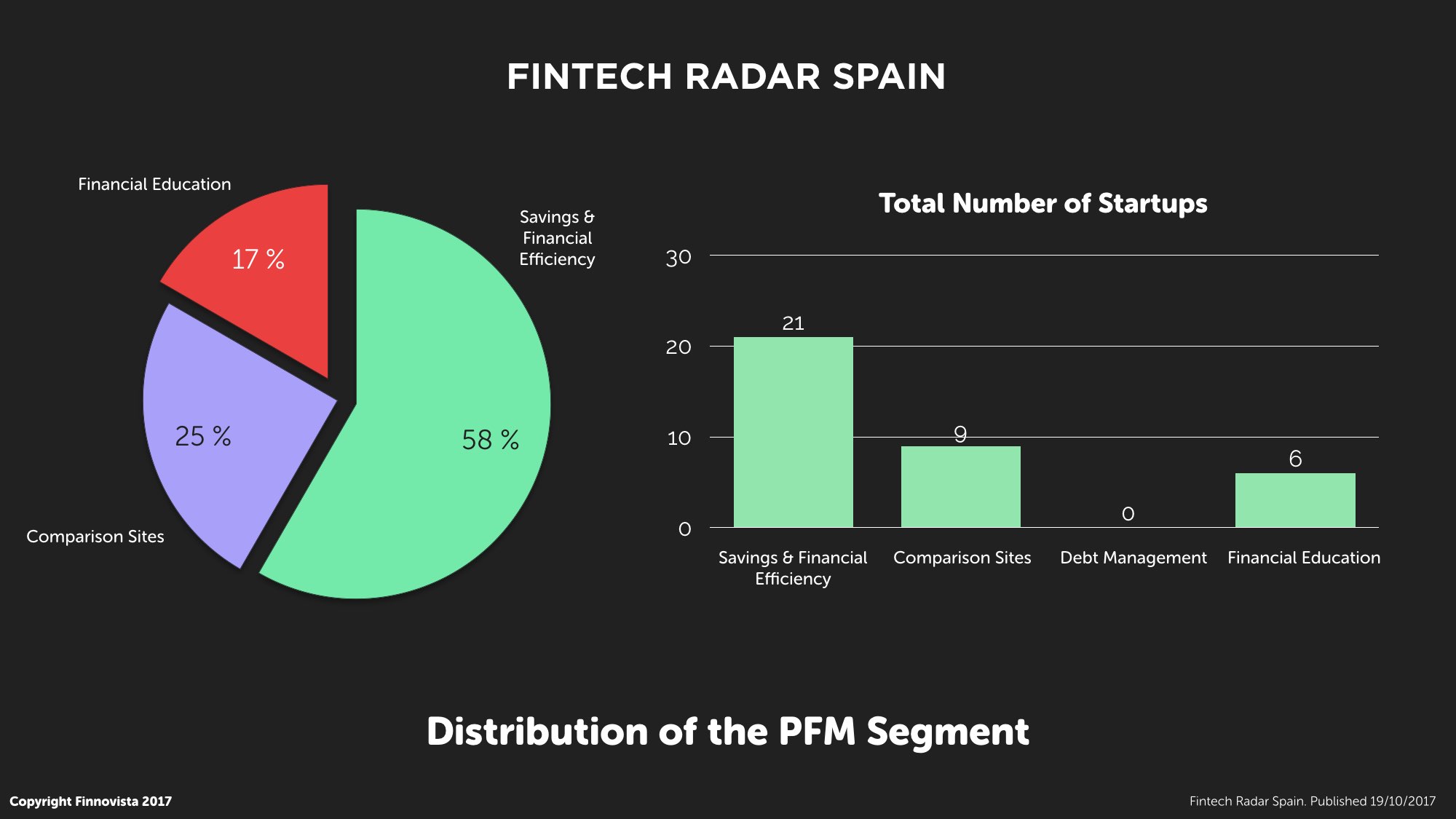 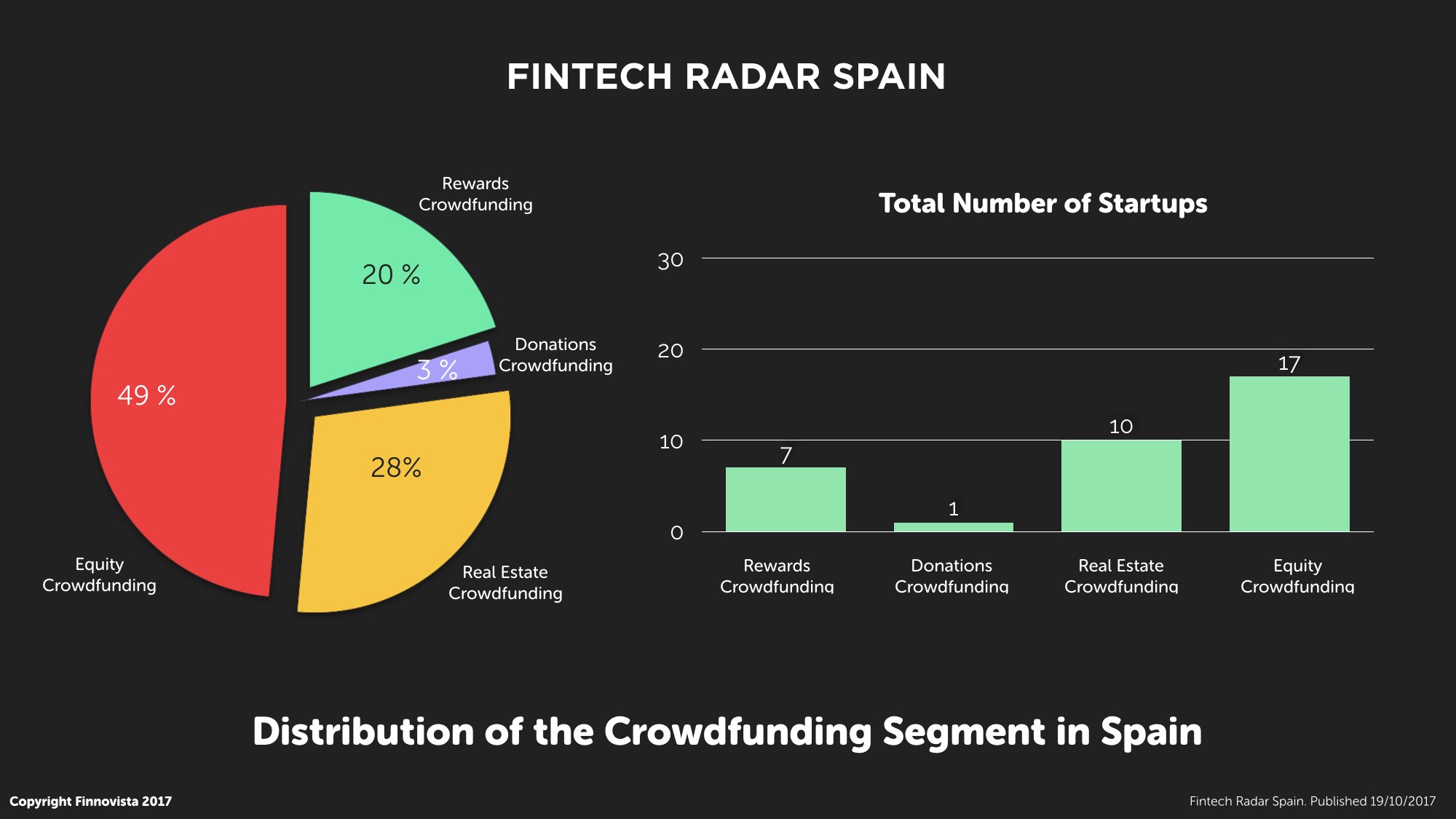 As we mentioned above, the Crowdfunding segment has rapidly grown in Spain. During the first quarter of 2017, Equity Crowdfunding platforms raised over 60% of the total amount raised in 2016. Through our analysis we managed to identify that this is the most common model among Spanish platforms, representing 49% of the operating ones. Real Estate Crowdfunding platforms represent 28% of the Spanish platforms and, ranking third, we find the Rewards model accounting for 20% of the total amount of crowdfunding platforms. Donation Crowdfunding is the least representative collective funding model in Spain, as it represents only 3% of the segment.
34% of the startups identified in the Enterprise Financial Management segment provide Financial Management & Business Intelligence solutions, 30% are Electronic Invoicing tools, 18% provide Payment Collection solutions and tools and 15% are Digital Accounting solutions. The remaining 3% have been identified as “Other” solutions within the Enterprise Financial Management sector. 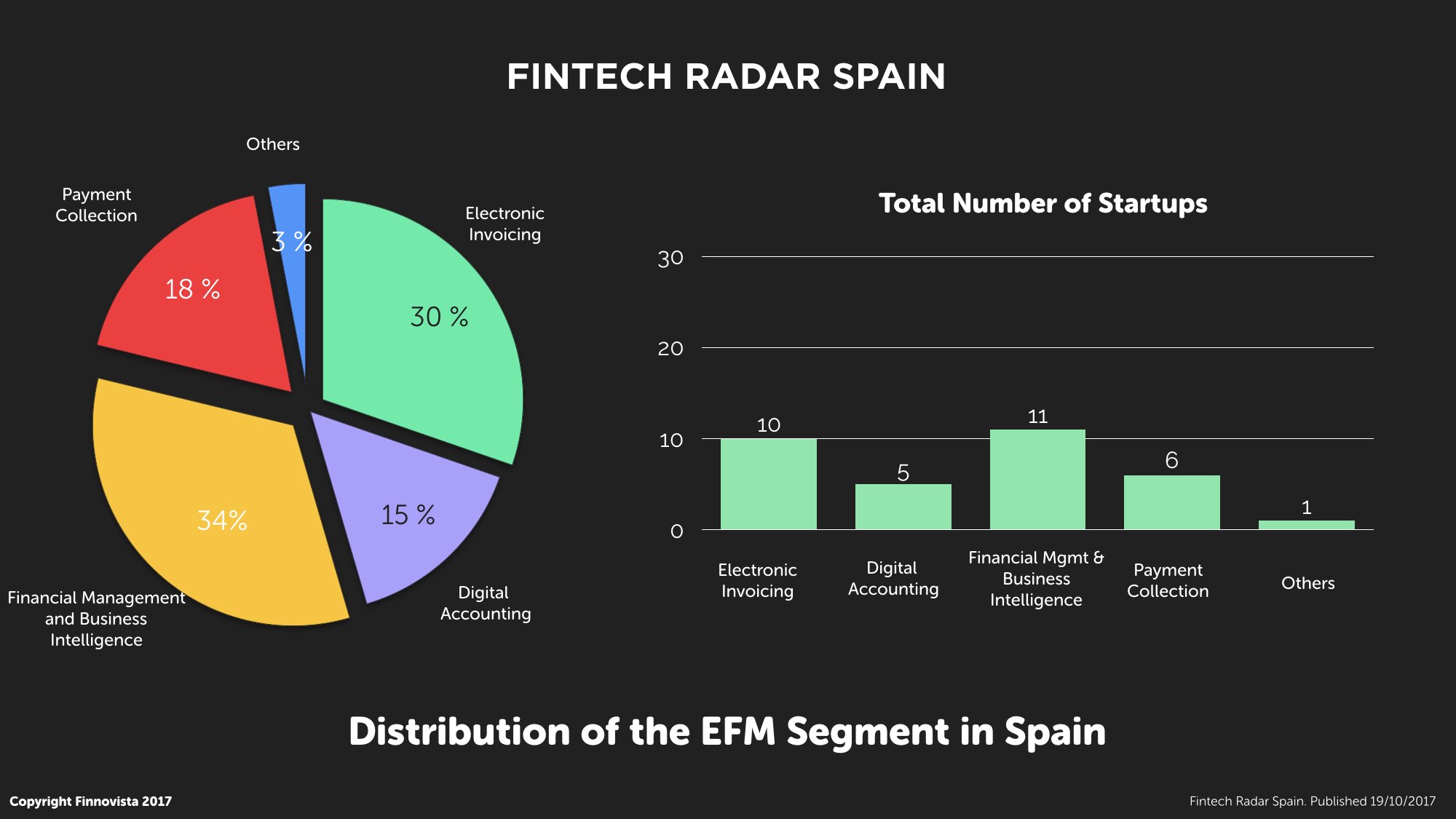 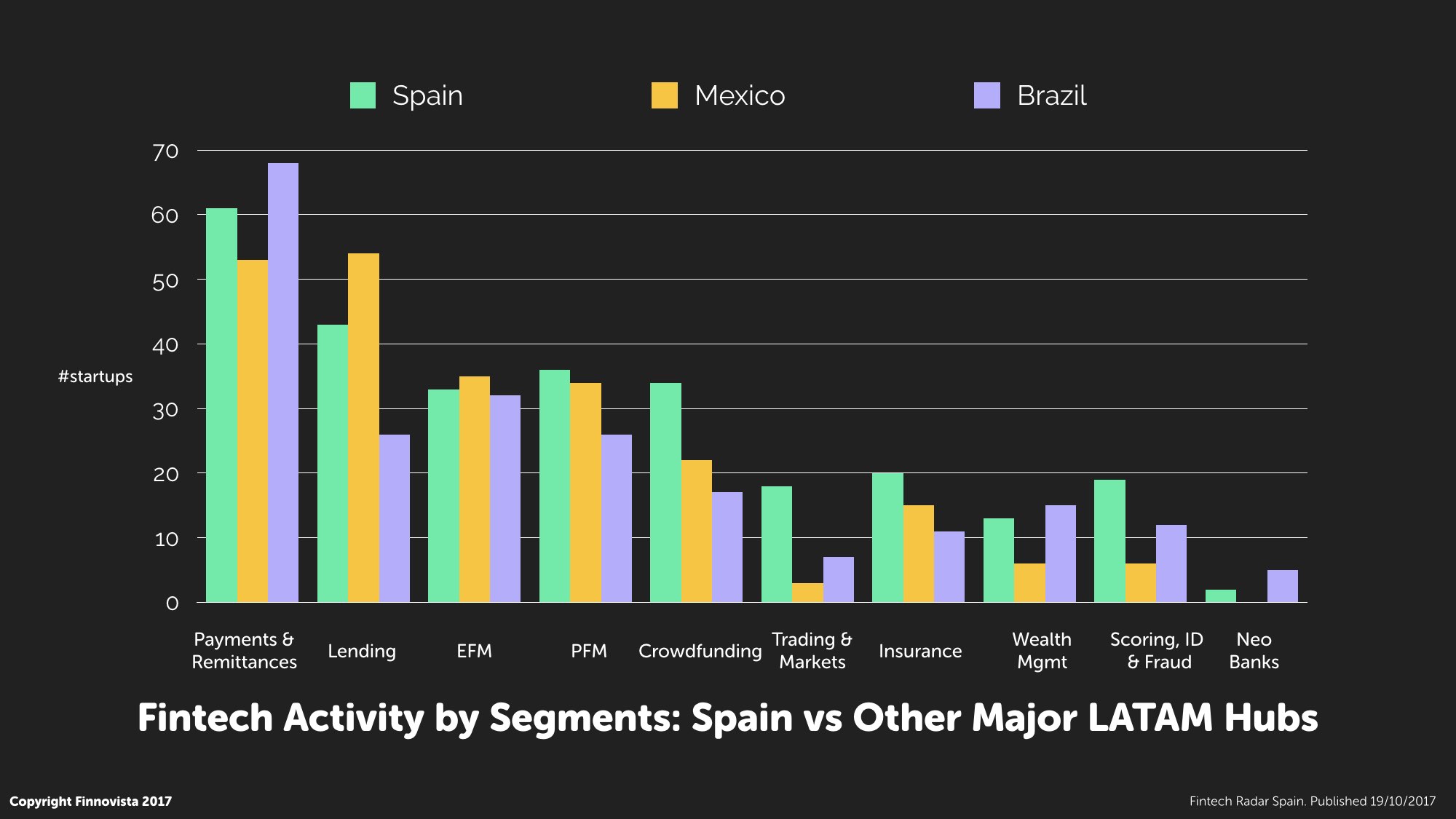 Spain positions itself as the largest Ibero-american ecosystem

The 294 identified Fintech startups position Spain as the largest Fintech ecosystem in the Ibero-american market, ahead of the 3 main Fintech markets in Latin America: Mexico with 238 Fintech startups, Brazil with 230 and Colombia with 124.

The distribution of the different Fintech segments in Spain has a similar pattern in comparison with the main Fintech ecosystems in Latin America, where most of the Fintech activity is concentrated in the following segments: Payments and Remittances, Lending, Personal Financial Management, Enterprise Financial Management and Crowdfunding.

When analyzing the distribution of the Fintech segments in Spain, Mexico and Brazil, we observed that Spain leads the total number of startups in the following segments: Personal Financial Management, Crowdfunding, Enterprise Technologies for Financial Institutions, Trading and Financial Markets, Insurance and Scoring, ID and Fraud.

Likewise, Mexico leads the total number of startups in Lending and Enterprise Financial Management, while Brazil is ahead in the segments of Payments and Remittances, Wealth Management and Neo Banking.

What is the next step for the Spanish Fintech ecosystem?

Since 2015 London has been recognized as the global Fintech hub, and since then it has been the most representative example of the sector’s potential. Until now it has maintained its recognition as the number one Fintech center in Europe, but with the awaited exit of the United Kingdom from the European Union, an opportunity arises for other capital cities with strong financial activity to attract Fintech companies and benefit from the job and wealth creation.

However, from Finnovista we are convinced that the greatest opportunity for the Spanish Fintech lies in the creation of a healthy ecosystem interconnected with Europe and Latin America, attracting the best European talent to cities like Madrid or Barcelona, in order to create from there the future leaders of the Ibero-american digital financial industry. History repeats itself: banks were the first to cross the Atlantic, and in a digital era of democratization of innovation, technological startups will be the ones to take the first step and grab this opportunity. Spanish Fintech startups like Fintonic, Aplazame and Bdeo are already operating across the Atlantic, with this last startup having participated in Finnovista’s acceleration program in Mexico City through our partnership with Startupbootcamp Fintech.

Lastly, we would like to remind all startups that have been included in this Fintech Radar Spain the invitation to respond to the survey that will be sent in the following weeks and that will not be published individually, but aggregated. From Finnovista, we are convinced that by publishing and sharing this level of information we will contribute to strengthening the Fintech sector in Spain and in the Ibero-american region. If you are a Fintech startup and you haven’t heard from us in the following weeks, we please ask you to request the survey through an email to: [email protected]

From Finnovista, we want to thank our collaborators, which have contributed to the update of the Fintech Radar Spain, among them: Fernando Cabello Astolfi, Javier Megías, Pablo Ruiz Correa and Ángel González. Thank you all for your support.

Do you know about a Spanish Fintech startup that has not been included in our Fintech Radar ?