Mexico, Brazil and Colombia position themselves as the main Latin American destinations for foreign Fintech startups mainly from Europe and the United States. The segments of Payments and Remittances, Lending, Scoring, Identity and Fraud and Enterprise Technologies for Financial Institutions lead the offer of foreign Fintech in the region.

In recent years Latin American Fintech entrepreneurship has grown at a rate of 50% and 60% and has drawn the attention of international investors and corporates through investment rounds in startups or strategic partnerships. But at Finnovista we ask ourselves, how appealing does the Latin American Fintech ecosystem result for foreign Fintech startups?

Since 2016 Finnovista has conducted different Fintech Radars about the most representative Fintech ecosystems in the Latin American region in order to create a comprehensive data source of the Fintech enterprises, evaluate the sector’s progress in the region, and give visibility and recognition to a movement that will lead the region towards an ubiquitous and inclusive digital finance landscape. So far, Finnovista has published over 15 studies about Argentina, Brazil, Chile, Colombia, Ecuador, México, Perú and Spain, as well as a regional study with the IDB.

On this occasion, Finnovista has conducted a study that, for the first time, aims to identify foreign Fintech startups that are currently offering their services in Latin America, in order to examine the most appealing regional markets for foreign companies and the reasons behind these trends, assess the evolution of new foreign companies entering the market in the following years and try to identify possible opportunities and obstacles in the region. 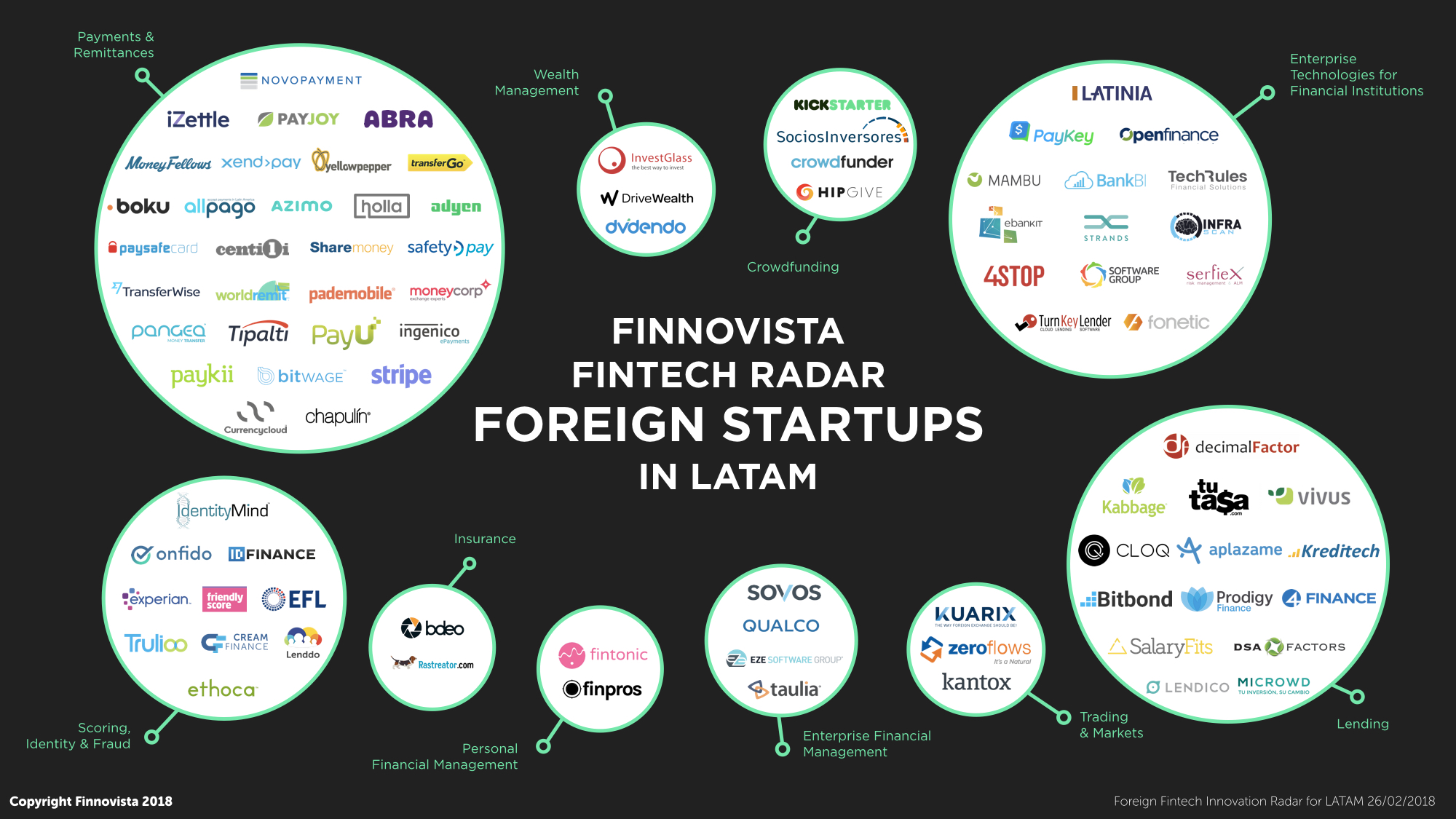 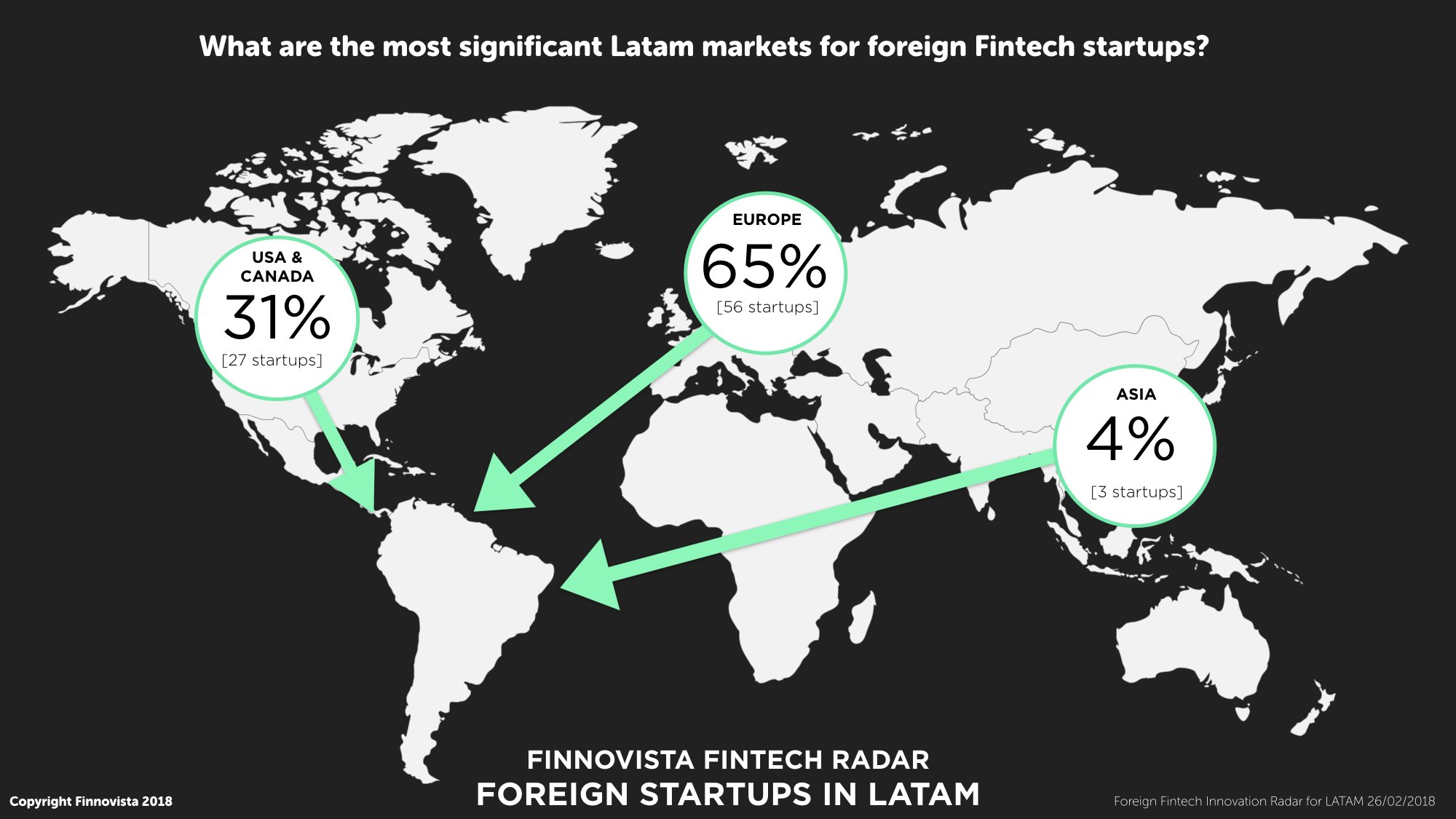 Furthermore, there are seven countries with an average presence of foreign Fintech startups:

According to the Fintech Radars conducted by Finnovista in 2017, the main markets in terms of Latin Fintech startups are Mexico (238 startups), Brazil (219), Colombia (124), Chile (75), Argentina (60), Perú (47) and Ecuador (31). As we can see, these countries are also the markets with the highest offer of foreign Fintech services; however, it is important to highlight that Chile, the fourth largest market in terms of Latin American Fintech startups, is not among the five most appealing markets for foreign companies, while Peru, the sixth largest Fintech Latin American market, positions itself as the fourth most appealing market for foreign Fintech startups. 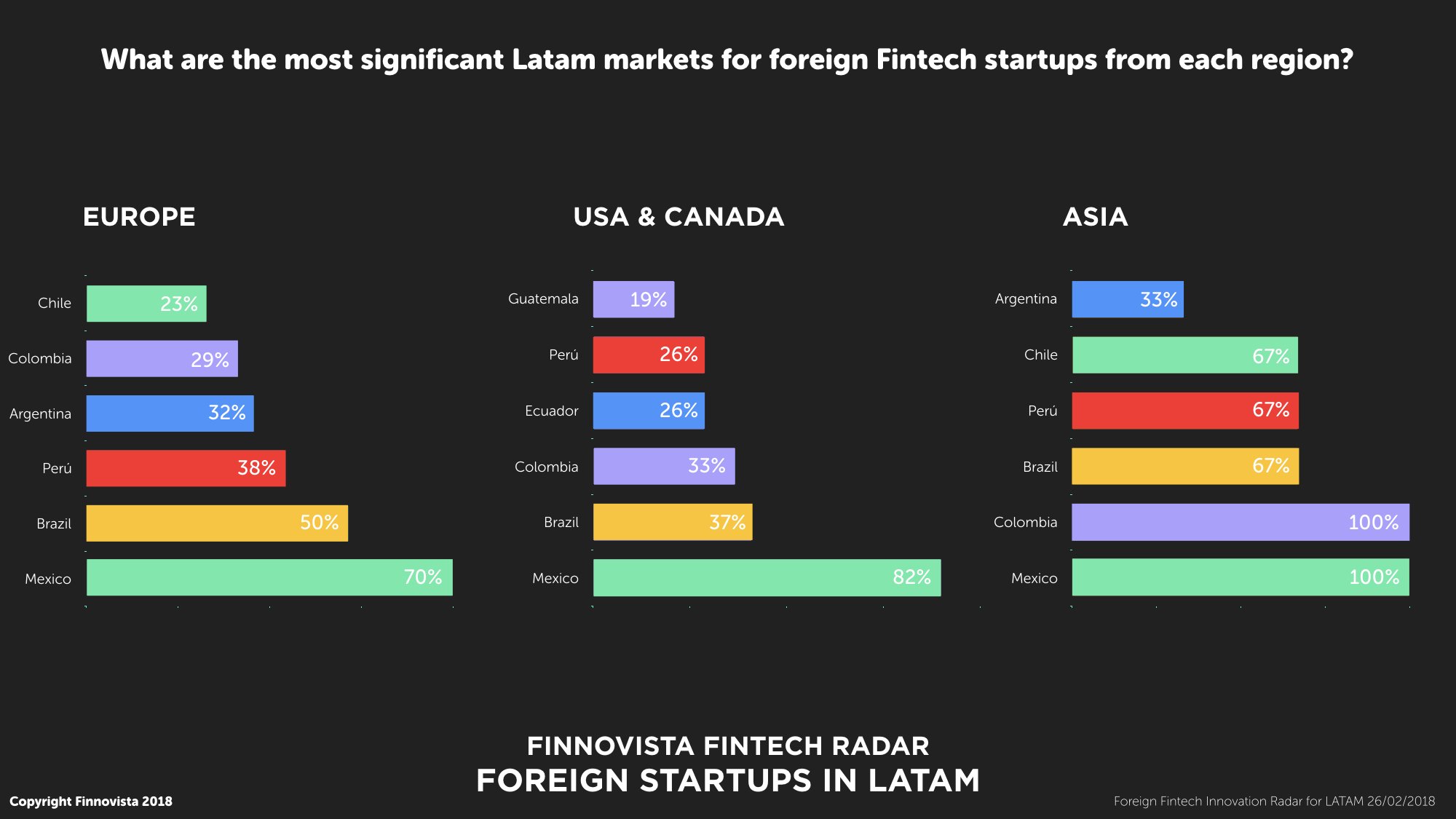 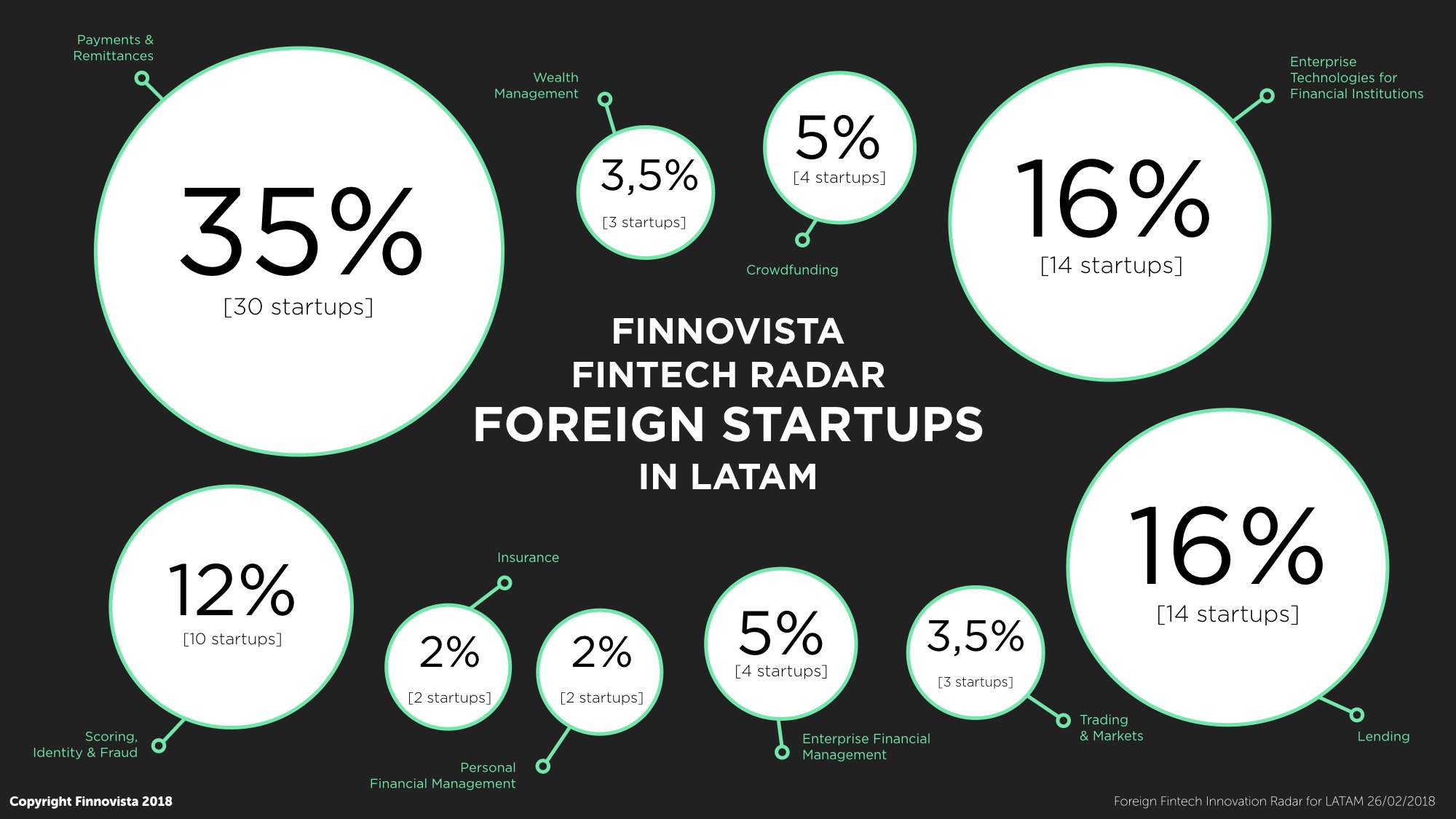 In order to gain a more comprehensive view about the type of Fintech companies that are entering the Latin American markets, Finnovista has identified the Fintech segments in which these companies are operating. The four principle segments among the identified foreign Fintech startups operating in Latin America are the following:

The remaining six Fintech segments are all under 10% of the identified startups in the analysis.

On the other side, Finnovista also identified an important amount of Fintech startups within the segment of Scoring, Identity and Fraud. In Mexico this segment only represents 2.5% of the total amount of Latin American Fintech startups in the country and 5% in Brazil, and this increases up to 12% of the total amount of foreign Fintech startups identified in the region. This large amount of foreign companies that enter Latin America offering risk management or digital identity solutions could be a sign of the need to start endowing the market with a technological framework capable of preventing risks associated with mature markets.

Once again, we can observe the huge opportunity that the Latin American market represents for Fintech startups from the region as well as for foreign Fintech startups that are looking to expand operations in foreign countries. Precisely, as we already highlighted in previous studies, in Latin America there are two elements that contribute to the importance of the Fintech sector: a high rate of unbanked people and a high technological penetration.

According to the World Bank, it is estimated that 2 billion adults (42% of the global adult population) are excluded from the formal financial system. In Latin America 49% of the adult population does not have access to a bank account, a figure well above the average of 6% in high income countries of the OECD. Given this situation, Fintech services represent the most important driver to improve financial inclusion due to its capacity to optimize costs and improve the supply of products and services, and a great market opportunity as it has the capacity to reach a segment of the population that was previously unattended by traditional financial services.

In this sense, Latin America represents a great opportunity for Fintech companies from around the world that are looking to address this market through the massive adoption of mobile technology. In 2016 the region had already 450 million smartphones and, according to the Mobile Economy Report 2016 by GSMA, this penetration is expected to increase up to 76% of the population within three years. This technological adoption has driven the adoption of formal financial services in the region to such an extent that in 2016 Latin America became the region with the largest increase in digital banking accounts, reaching the 10 million digital bank accounts at the end of the year in comparison to the one million in December 2011.

In recent years Governments and regulators have understood the power that technology has in creating a more inclusive financial system, fighting against poverty and stimulating economic growth. A number of initiatives have been taken which have promoted the emergence of regional and international Fintech solutions, such as the policy of electronic invoicing in Mexico, Chile, Brazil, Ecuador, Argentina, Guatemala or Peru among others, which requires buyers and sellers to register the invoices of each transaction electronically, accelerating the digitalisation of finance and the creation of Fintech companies offering Enterprise Financial Management services.

However, there are still a lot of challenges that need to be addressed in order to attract more foreign companies. On one side, the political instability in countries like Venezuela or the economic volatility in countries like Mexico due to the uncertainty brought about by the trade policy with the United States could present a barrier for foreign countries when selecting Latin America as the destination for their international expansion. Furthermore, it is necessary to create clear and homogeneous regulatory systems that permit the development of a favourable ecosystem for entrepreneurship and innovation. Finally, because technology on its own is not a guarantee of success, those companies that begin to operate in Latin America must understand the complexity and singularity of the markets in each country in order to adapt their products an services and solve the specific needs of each segment of the population. To this respect, acceleration and/or scaling programs such as Startbootcamp FinTech Mexico City can be a very interesting options for startups that are looking to enter new markets, as they provide the necessary tools that might help in understanding the market as well as the opportunity to connect with investors and potential clients that, as mentioned by Diana Florescu, can be very useful when beginning an internationalisation process towards an unknown market.

At Finnovista we are convinced about the potential of the Latin American Fintech ecosystem both for regional and international startups, especially for those sharing cultural aspects that could benefit from an easier entrance and adaptation of their products and services in these new markets, as in the case of Spain. 2017 was the year in which we saw a massive growth in the number of Latin American Fintech startups, and we are convinced that 2018 will be and exciting year where we observe a positive evolution of the foreign market with the entrance of new competitors that foster and accelerate innovation in order to transform the financial industry and build a more inclusive world.

From Finnovista we want to thank our collaborators, which have participated in the elaboration of the first Fintech Radar Foreign Startups in Latam: Ana Barrera, Matthieu Albrieux, Miguel Santos, Miguel Herrera and Guillermo Acuña.

Do you know about any foreign Fintech startup offering their services in Latin America that has not been included in our Fintech Radar?