We are at that point of the year when we look back, trying to take stock of what happened and also trying to outline the vision and challenges we will confront in the year to come. As a startup within the Fintech sector, in only one year Finnovista has experienced as many things as those that take place in a large corporation over the course of  5 or 10 years, thus making this exercise even more relevant given the intense pace of change.

5 years ago Andrés (my partner and co-founder) and I began to ask ourselves “5 years from now, what will drive change in the financial services industry?”. This question led us to launch Finnovista in March 2013, and the answer was that “Fintech will transform the industry”. This conviction made us articulate our vision of using this transformation to create a better world, a world in which startups innovate and generate value x10 or x100 and financial institutions adopt new collaborative capabilities to innovate as only technology-driven companies do, leveraging their important assets and market positions. 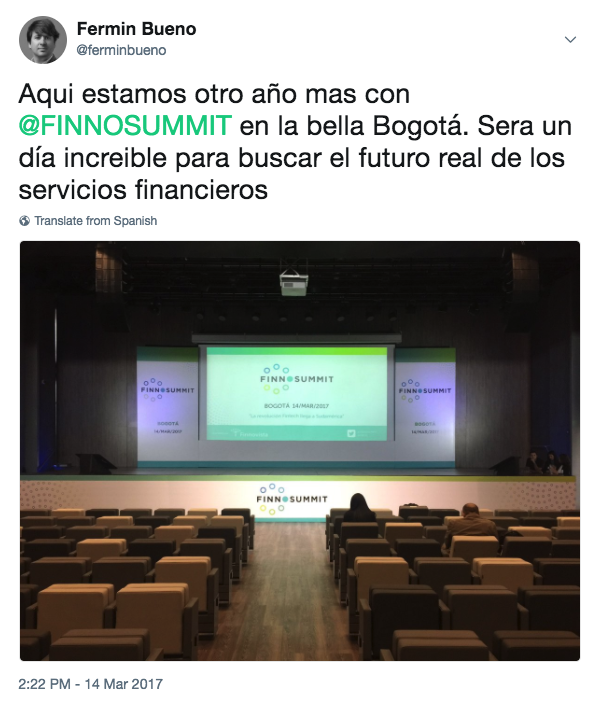 Throughout 2017 we have been able to attract over 3,000 Fintech innovators to over 30 events and conferences that we have carried out this year in Spain and Latin America, to discuss “the real future of financial services”, where Fintech becomes the focus of the conversation. FINNOSUMMIT and other events carried out by Finnovista are empowering and connecting the region’s Fintech ecosystem, creating an “open source” of innovation in financial services and facilitating a connection between startups, financial entities and investors. 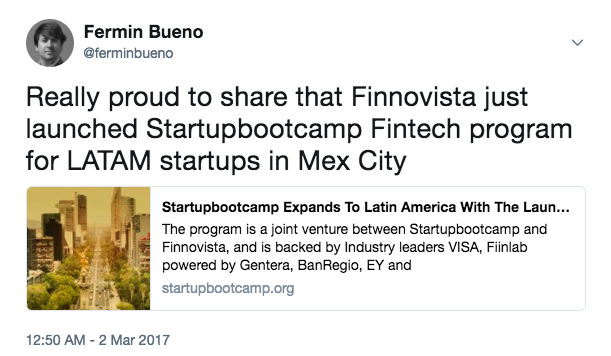 The collaborative projects that we implemented in 2017 with initiatives like Visa’s Everywhere Initiative, Startupbootcamp FinTech or Finnovista Pitch Day have enabled us to keep discovering the emerging talent that, through entrepreneurship, innovation and technology, will transform the industry. In 2017 we have involved over 500 Fintech startups from Spain and Latin America in these initiatives that aimed to identify the best talent to empower and promote it to the next level where clients, funding or new partners will turn them into future leaders of the financial services in the region.

Spain and Latin America are becoming fertile regions for Fintech entrepreneurs, as we already forecasted in our report at the end of 2016, where we predicted that 2017 would be the year of Fintech For Inclusion. In our Fintech Radars, we have identified over 1,100 Fintech startups in the region, where the majority of countries are seeing the Fintech ecosystem grow at a year-on-year rate of 40 or 50%. This “open sourcing” of knowledge that we carry out through our Fintech Radars is driving Fintech, facilitating the labour of investment, partnership and, obviously, regulation of this new sector. This confirms the transforming landscape that we envisioned in December 2012, although we are aware of all the challenges and opportunities that we have ahead of us in the following 5 years. 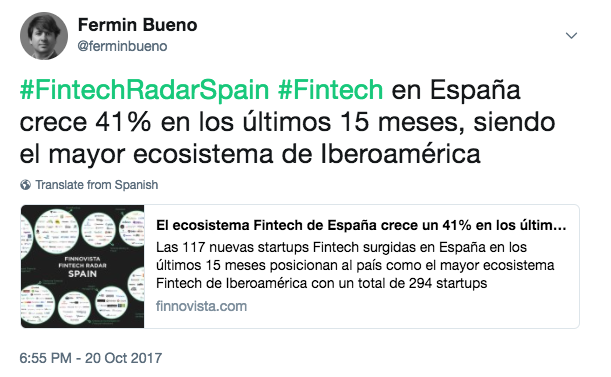 In 2017 we have witnessed important initiatives in the sector, such as the regulatory attempts to drive Fintech innovation and give it the recognition and space needed to transform our societies and economies. Initiatives such as the PSD2 regulation in Europe and the Mexican Fintech Law will facilitate the development of new spaces, “sandboxes” and “open platforms” that will be a gateway for more innovation in this industry.

In 2017 we have also witnessed the arrival of new venture capital funds with an exclusive focus or specialization in Fintech, such as Ignia, Elevar Equity, Quona or Alta Ventures, most of which have over 100M USD to invest and drive Fintech entrepreneurship towards an exponential scale. We are also pleased to see how multilateral entities such as BID, IFC or CAF are promoting Fintech in the Latin America region and in some cases investing in promising digital finance projects. 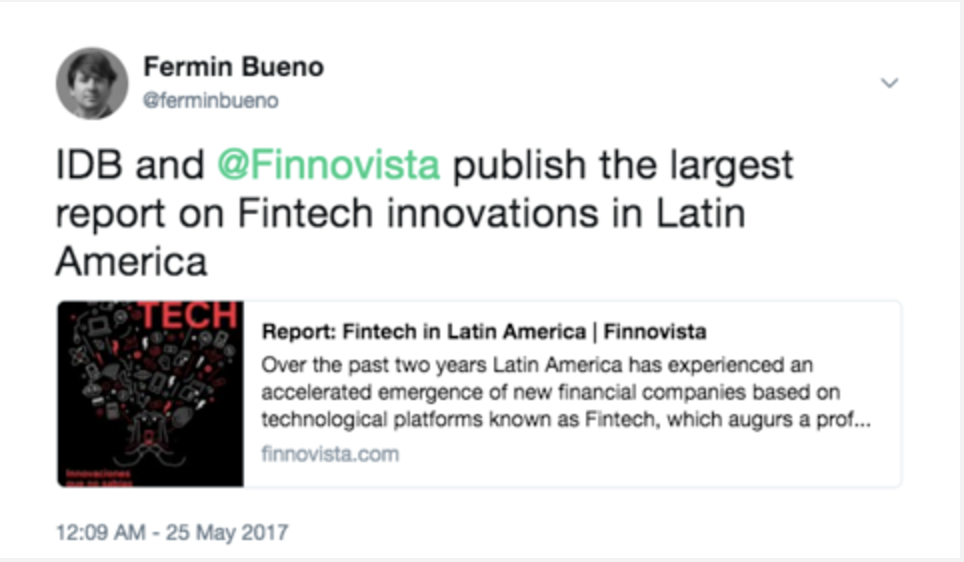 In 2017 financial institutions have not lagged behind regarding this transforming landscape that threatens to leave them in an irrelevant position if they don’t react and respond to this train of x10 value creation. Initiatives such as Startupbootcamp Fintech and Startupbootcamp Scale, both led by Finnovista, are facilitating for the first time in Latin America collaborative innovation between startups and corporates through a consortium composed by pioneering firms such as Visa, Gentera, HSBC, Banregio, EY, Ignia and White & Case. Global banks have also taken the lead in the region, with examples like the acquisition of OpenPay (finalist in the competition organized by Finnovista 2015 for BBVA), the sandbox platform launched by BBVA in Mexico, or the Corporate Venture Capital fund launched by Santander Innoventures, which wrote its first check-in Latin America with their investment in ePesos. 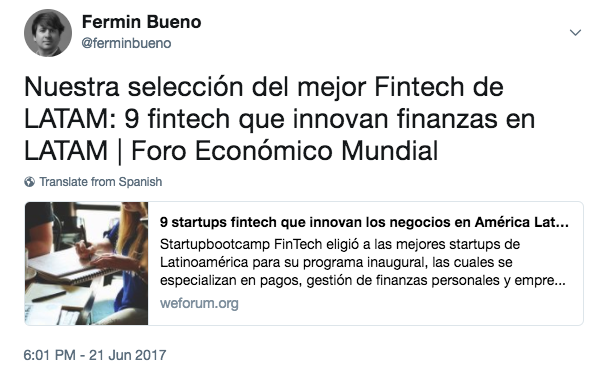 However, collaborative innovation or external innovation for large companies is like drinking from a firehose, in other words, to achieve success you need the adequate teams with interfaces and membranes that enable the exchange, otherwise you might end up achieving disappointing results. For this reason, our focus on collaborative innovation comes hand in hand with a joint-venture with Startupbootcamp, probably the single global platform with the largest deployment and experience in obtaining tangible results for startups and corporates. 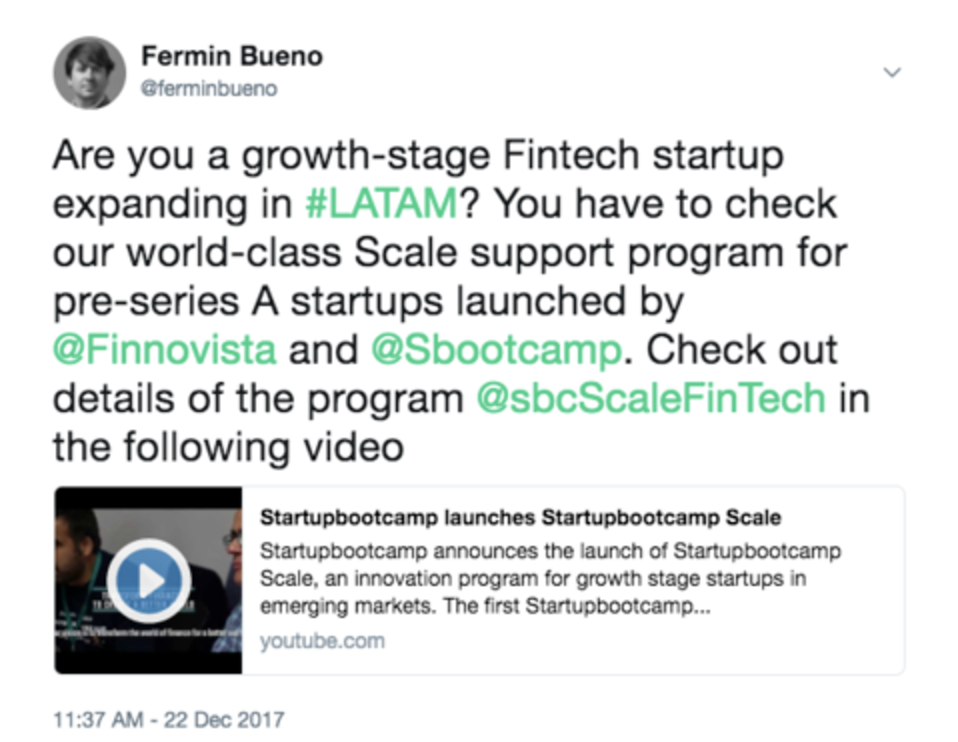 Through initiatives like Startupbootcamp Fintech and Startupbootcamp Scale, both in Mexico City and coming in  2018 to Spain, we will enable startups to collaborate with the financial services industry in a facilitated ecosystem that compensates the asymmetry in the relationship between startups and corporates in order to achieve the best results for both parties. These programs help us execute our vision, as we select the Fintech startups with the highest potential across Latin America and Spain and we promote them to help them become regional digital financial leaders in their corresponding segments. 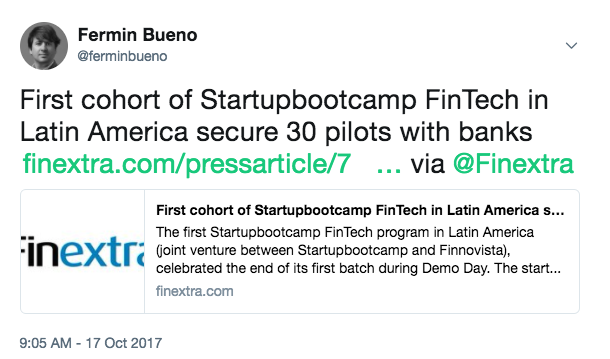 Technology-driven entrepreneurship in Spain and Latin America has not yet had success stories (IPOs or unicorns) that we were all expecting given the landscape in the United States and countries in Europe. However, we are optimistic and convinced that the dozens of mid-stage Fintech startups that are now valued at 50M or 100M USD, and the hundreds of early-stage Fintech startups that are now valued between 2-10M USD, have an unbeatable growth perspective in the region. If it’s not 2018, 2019 or 2020 will be, and we will soon witness the first success stories of technology-driven startups made reality through Fintech. 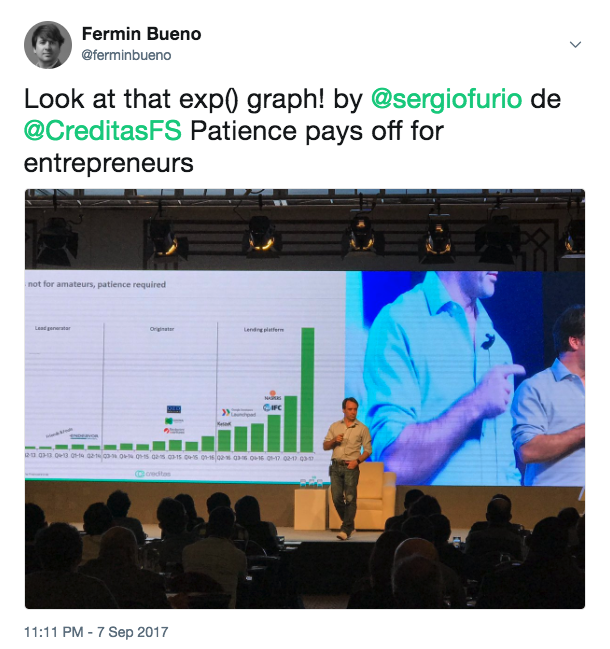 At Finnovista we will continue working hard to remove all barriers for Fintech startups to change the financial world in collaboration with financial institutions and other corporates and investors in order to create a better world. Do you want to join us on this journey?