I once overheard the managing director of a medium-sized wealth management firm say: “our industry is more regulated than the nuclear industry.” As someone in the Fintech space, my take was that she was relying on financial regulation to protect her firm’s vision and business model; fortunately for the consumer, and the Fintech sector in general, regulators do not think along these lines, as demonstrated, for example, by the OCC in its proposal to ease the requirements for Fintech startups in the United States, or larger-scale initiatives laid out by regulators in Singapore or UK.

At Finnovista we have been building and developing the Fintech ecosystem in Latin America for the past four years with activities such as FINNOSUMMIT in Bogotá and Mexico City; Finnovista Pitch Days; Fintech Radars; and through startup competitions such as FINNOSUMMIT Challenge, Innotribe Startup Disrupt and BBVA Open Talent. During this time, we have seen firsthand how the number of players willing to take part in the transformation and innovation of the industry has grown.

It is precisely this increase in the number of players that are innovating in the financial services industry that has led to greater efforts and conversations within the sector that are focused on adapting regulation to digital transformation. There’s no doubt that one of the stakeholders that has shown greater interest in taking an active role in the ecosystem, both under their own initiative, as well as a result of Fintech startups’ efforts, is the industry regulator.

In different countries around across Latin America, governments have taken actions to provide clarity to certain business models in the best interest of consumers and startups. For example, in June 2016, the Mexican Government presented the National Financial Inclusion Strategy (NFIS), which has as one of its main pillars the utilization of technological innovations to extend the use of financial products and services within a regulatory framework that provides security to all the participants of the financial system.

In several countries across Latin America, Fintech entrepreneurs have fostered the creation of professional associations aimed at representing and defending the interests of Fintech startups among regulators, promote the Fintech culture among the general public and coordinate the work required to drive better industry practices. A number of associations have emerged, for example: Asociación de Fondeo Colectivo (AFICO) in Mexico in 2014, the Brazilian Association of Equity Crowdfunding in 2014, the Mexican Fintech Association in 2015, and the Associação Brasileira de Fintechs (ABFintechs) and the Colombian Fintech Association, both in 2016. In the first month of 2017 we have already seen the formation of Camara Argentina de Fintech, an initiative led by the serial entrepreneur and founder of DineroMail (now PayU), iBillionaire and Moni, Ale Estrada, and I am confident we will see similar initiatives in the coming months in other countries across the region.

Over the past several months, Finnovista has been deeply immersed monitoring the Fintech activity in Latin America together with the Inter-American Development Bank (IDB), the results of which will soon be published. Through research and a survey shared with the more than 1000 Fintech startups from across the region, we managed to conduct a comprehensive study and an in-depth analysis of the sector, which also includes elements related to regulation, as well as an assessment of the entrepreneurs on the current regulatory environment towards their startup and the Fintech sector. The aggregated data shows that 21.3% of Fintech entrepreneurs in the region believe that the current regulation is excessive, although another 27.2% of entrepreneurs points out that, even though a specific regulation does not exist, it is necessary. However, it is important to highlight that 45.6% of respondents mentioned that current regulation is appropriate, or that a specific regulation is not necessary. Only 5.9% thinks that regulation is very lax.

The development of the Fintech sector in the region has indeed advanced, but there is no room for complacency – the leaders and decision makers of the region must take concrete steps that materialize and give continuity to the recent traction we have observed in the Fintech sector. As innovation progresses, easing regulatory and legislative frameworks to enable (and not disable) access and operation of Fintech within the financial system has become essential. A constant relationship between regulators and entrepreneurs will be necessary, and this must be done through diverse mechanisms such as the creation of discussion forums, the realization of consultations, the implementation of regulatory sandboxes and the support to RegTech innovations in the region. Just as we illustrate in our LATAM Regulation Scorecard, Latin American countries are still far away from achieving the maturity and development levels in regulatory matters that leading countries in this field, such as Singapore and the United Kingdom, have reached. 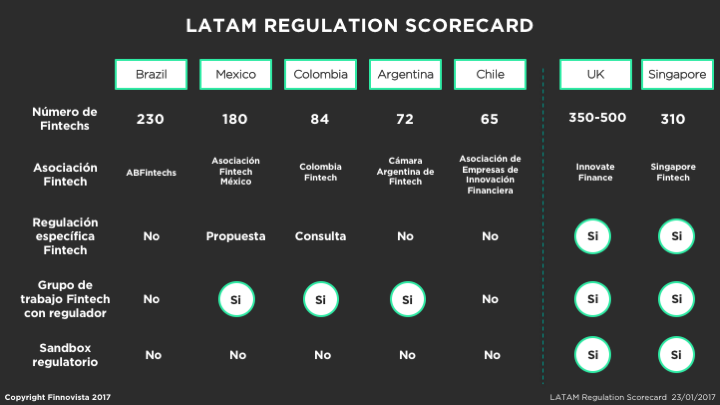 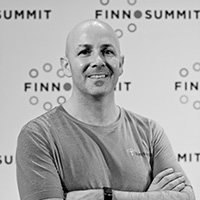 Andres Fontao is Co-founder and Managing Partner of Finnovista, where he has pioneered fintech events, startup competitions and bank-sponsored open innovation programs throughout Europe and Latin America under different brands, including Next Bank, Innotribe and BBVA Open Talent brands. Prior to starting finnovista, Andres spent time with a Silicon Valley-based fintech start-up leading expansion into Europe and LATAM. Before that, he was head of mobile banking at Bankinter. Andres has also worked as a consultant to mobile operators in Europe and Mexico. Andres holds a BA from Middlebury College in Vermont (USA) and MBA from IE Business School in Madrid.