The 47 new Fintech startups that emerged in the past 12 months in Colombia consolidate the country in the race for Fintech innovation in Latin America, driven by the growth of the segments: Payments and Remittances, Lending, Enterprise Financial Management and Crowdfunding.
he Colombian Fintech ecosystem has been one of the most dynamic in Latin America for some time, just as we saw in the previous edition of our Fintech Radar Colombia. In this new update, Finnovista has identified 124 Fintech startups in Colombia, which represent an increase of 47 startups or a growth by 61% since the last edition published one year ago, where 77 Fintech startups were identified. This growth reflects the sheer activity that the sector is going through in the country, which consolidates itself as the third largest Fintech ecosystem in Latin America, behind México (238 startups) and Brasil (230 startups). 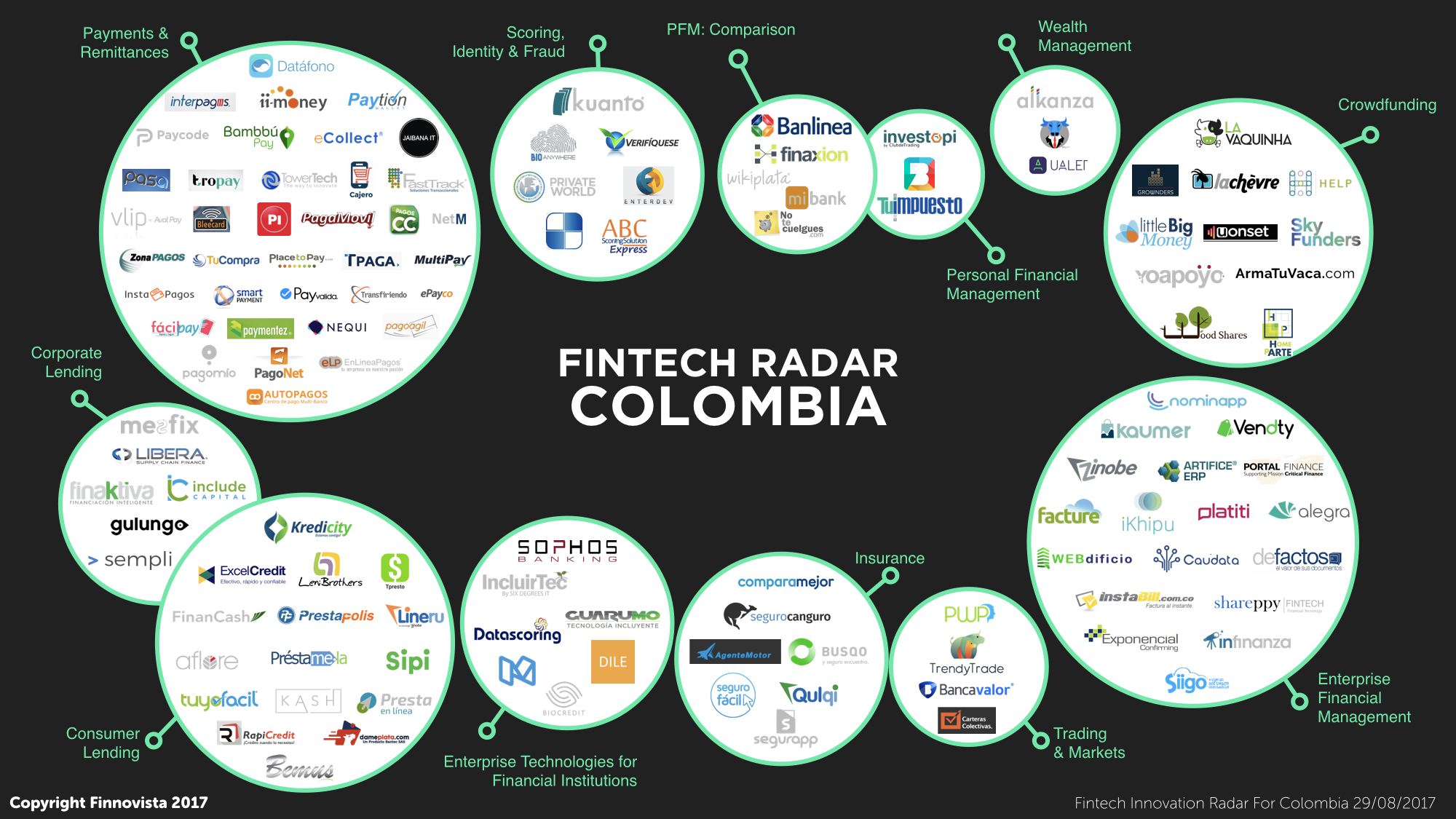 The 124 identified startups are distributed along 10 Fintech segments, being the following 4 the main segments in Colombia:

The remaining 6 segments are the emerging segments, each of them representing 6% or less of the total number of startups: 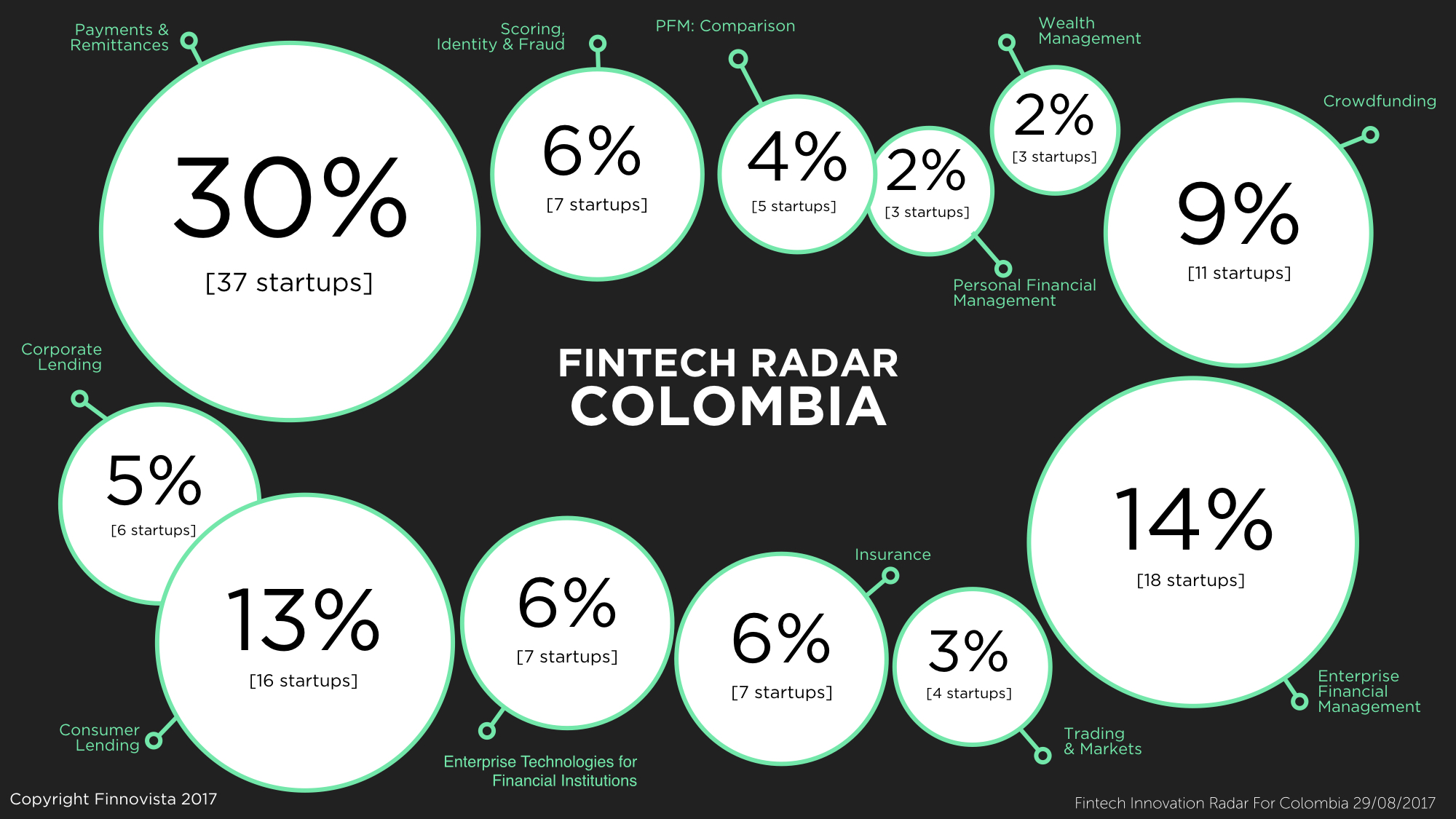 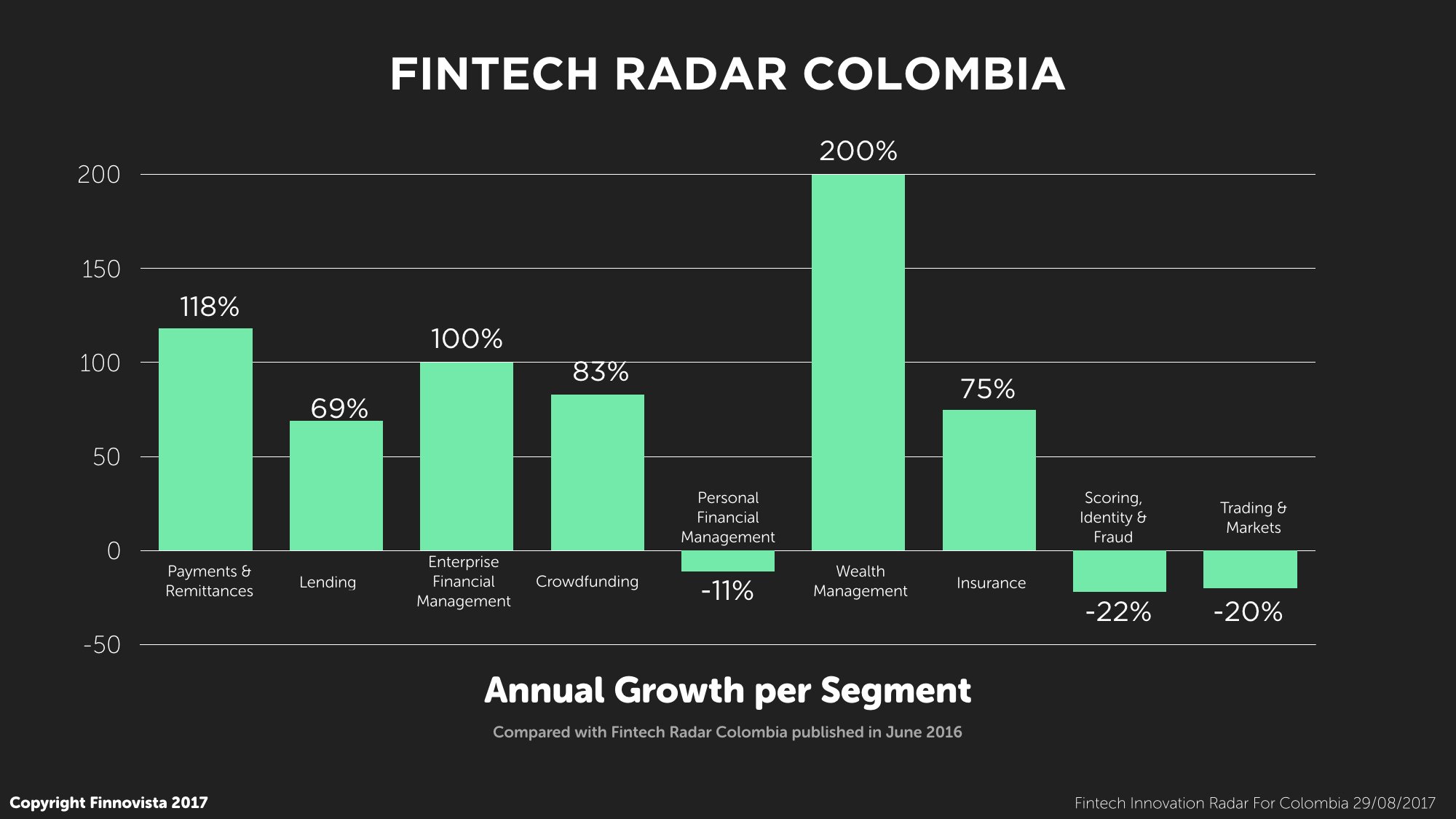 The high growth rate of the Payments & Remittances segment has been influenced by the ease and quickness of electronic payments services, as well as by a greater confidence among consumers, which have led to an increase of purchases, payments and online transfers. According to the Transactional Report presented by ACH Colombia, during the first half of 2017, 24 million online transactions were carried out in Colombia, which implied 64 trillion pesos were mobilised in payments and online purchases. Likewise, 9,6% of the population in Colombia prefers to carry out transactions electronically. According to Jeff Paduch, Managing Director of Advent International, “regulation and technology are driving growth in the online payments market, lowering entry barriers and creating more competitiveness”.

It is interesting to highlight how in this edition of the Fintech Radar Colombia there are segments that have experienced a negative growth. These are the segments of Scoring, Identity and Fraud, with a negative growth of 22%; Trading & Markets, which has decreased by 20%; and Personal Financial Management, which has decreased by 11% in respect to the previous edition. It is important to point out the negative growth experienced by the Personal Financial Management segment, as in the last version of the Fintech Radar Colombia it was the third largest segment in number of startups together with the Enterprise Financial Management Segment, and one year later we identified less startups than one year ago, with this segment falling down to the fifth position in number of startups, overtaken by the Crowdfunding segment.

When compared with the two main Fintech ecosistems of the region, Mexico and Brazil, there are key aspects to highlight in the Colombian Fintech sector. The three segments with the highest number of Fintech startups are the same in the three countries: Payments & Remittances, Lending and Enterprise Financial Management. However, in Mexico the largest segment is Lending (23%), while in Colombia this segment lies in the second position (17%), which could indicate a growth opportunity of this Fintech segment in Colombia, due to the similarity of the low rates of financial inclusion and lending penetration for SMEs and individuals that we find in Mexico and Colombia.

Comparing the segment of Payments & Remittances in Mexico and Colombia, we can see how these markets are in very different stages within this Fintech segment: in Mexico the growth of the Payments & Remittances segment became saturated, being the segment with the lowest growth rate (only 12%) in 2017, while in Colombia this segment has experienced the second largest growth rate of 118% in respect to last year. 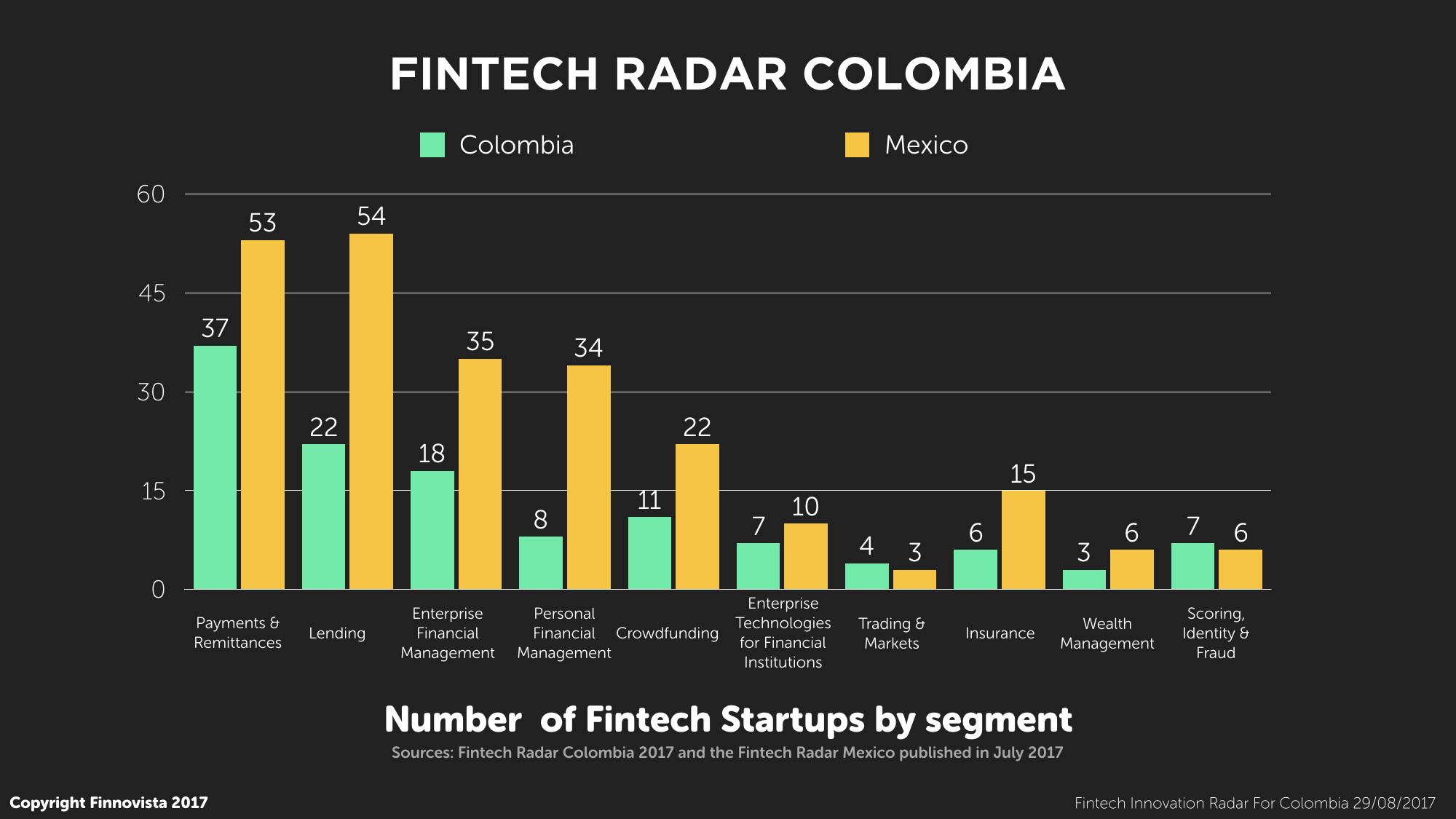 As mentioned above, the segment of Personal Financial Management loses momentum in Colombia, accounting only for 6% of the total with 8 startups, and steering away from the figures found in Mexico, where there are 23 startups (10% of the total) or in Brazil, where 23 startups were identified (11% of the total). In other words, this segment has approximately half the presence in Colombia than it has in the two main countries of the region, which could reflect a unique opportunity for players that are looking to enter the Colombian market in this segment. In Finnovista, we are convinced that the Personal Financial Management segment will be a key segment in the future of financial services, as the disaggregation of service offers carried out by Fintech startups will have to be aggregated in the foreseeable future in a marketplace of digital financial services, and startups within this segment are in the best position to conduct this aggregation.

In order to carry out a more profound and detailed analysis of the Fintech ecosystem in Colombia, we conducted a survey among Fintech startups in the country regarding different business aspects. The most important results of the survey have been highlighted hereunder. 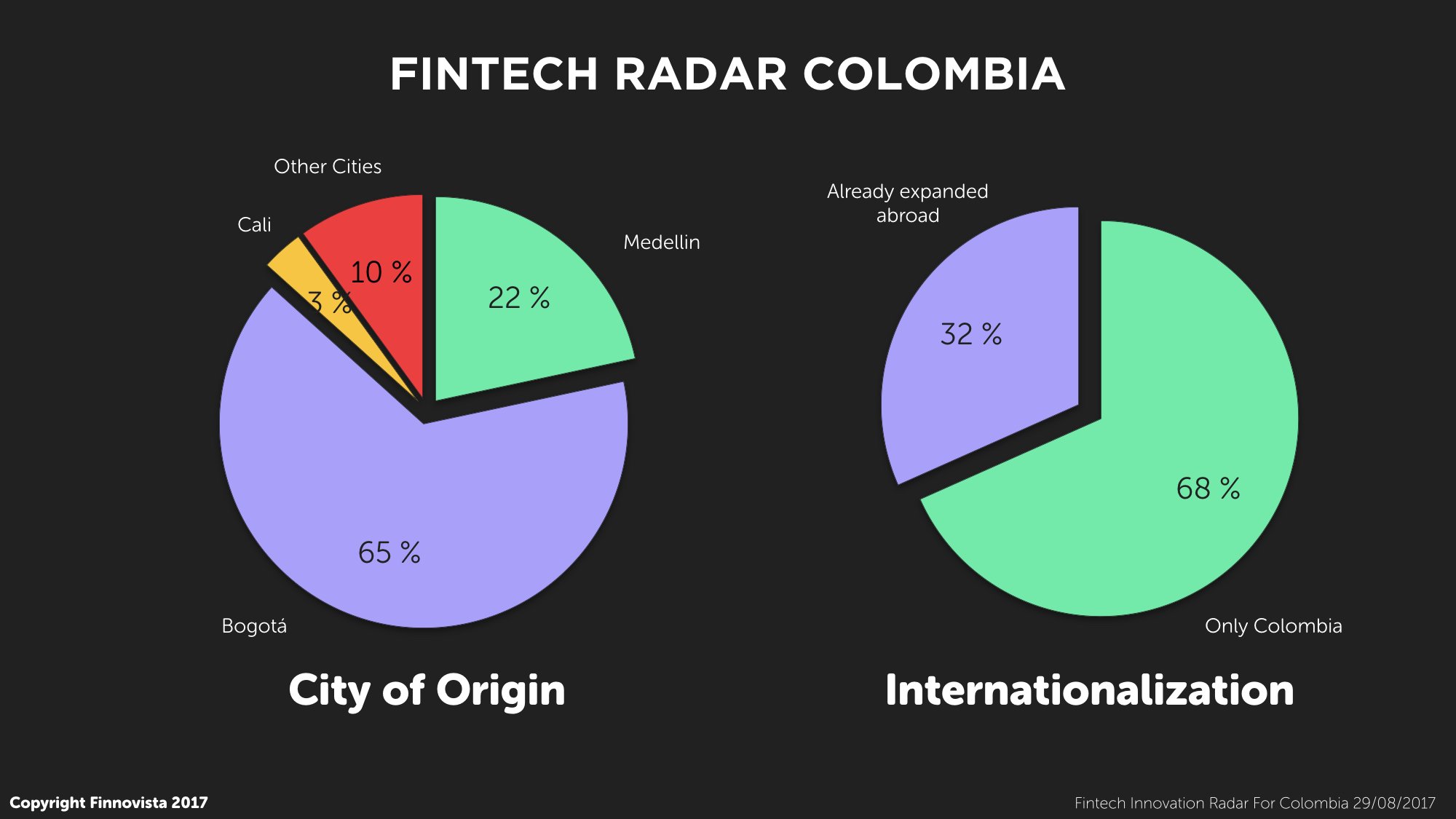 The data gathered shows that the majority of startups come from the capital, Bogotá (65%), followed by Medellín (22%) and Cali (3%), while the remaining 10% is distributed over six different colombian cities. In terms of internationalisation, it is interesting to point out how in Colombia we find a higher percentage of startups that operate beyond national borders (32%) compared to markets like Mexico and Brazil, where only 10% of startups claim to have expanded internationally. However, the number of Colombian startups operating beyond the Latin American region is still very low, as only 4 startups report having expanded their business out of the region.
It is interesting to highlight the high concentration of products and services focused on attending the needs of the unbanked or underbanked population of the country, as in Colombia we find 45% of the startups having as target customers underbanked or unbanked consumers and SMEs. As in Mexico, Colombia is a country with a low formal financial services penetration. According to the World Bank (2014), only 38% of adults older than 15 years in Colombia have access to a bank account. These figures reflect that this population segment unattended by traditional financial services represents a unique market opportunity for Fintech startups in Colombia, which in Finnovista we have so-called Fintech for Inclusion. 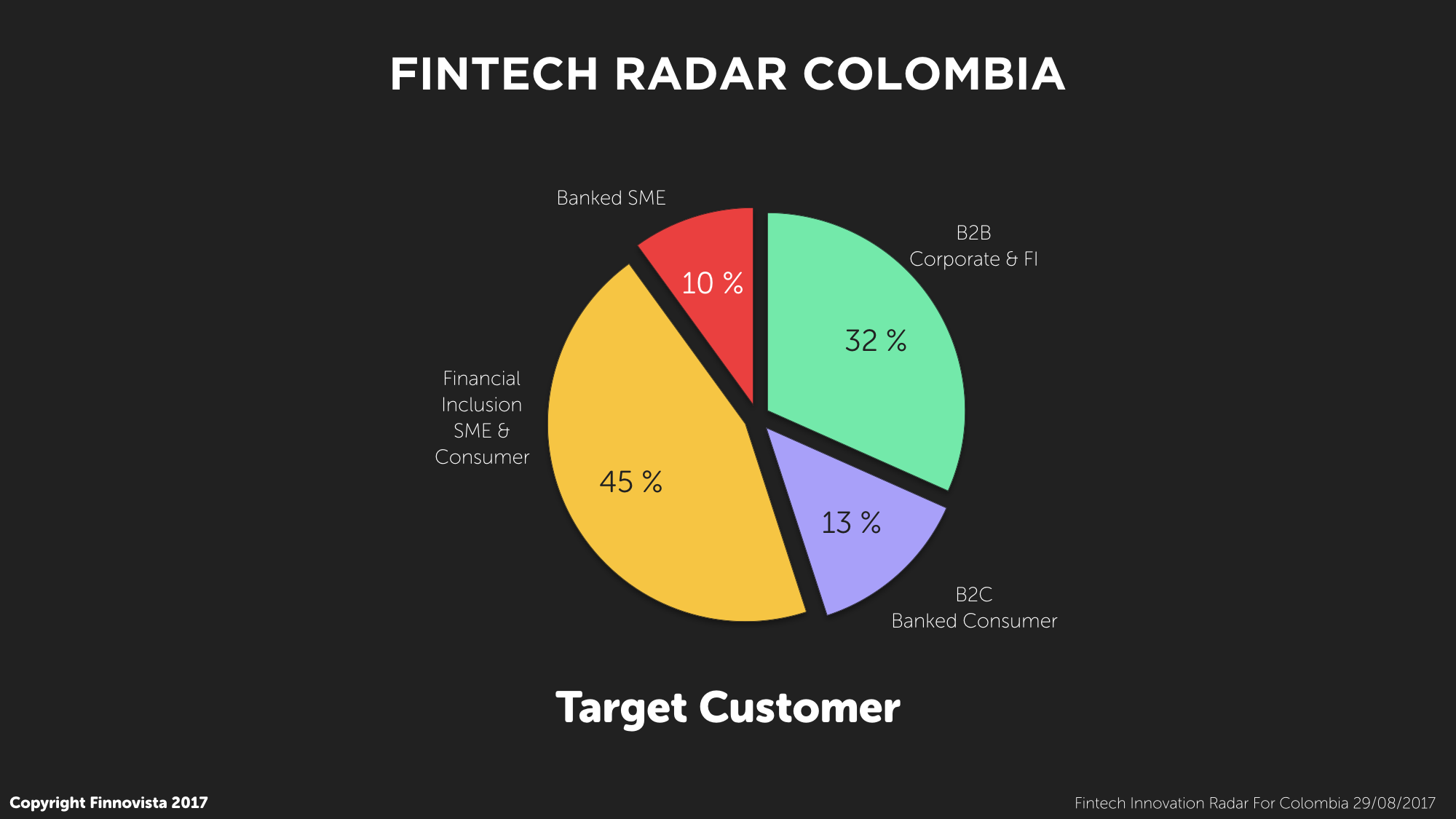 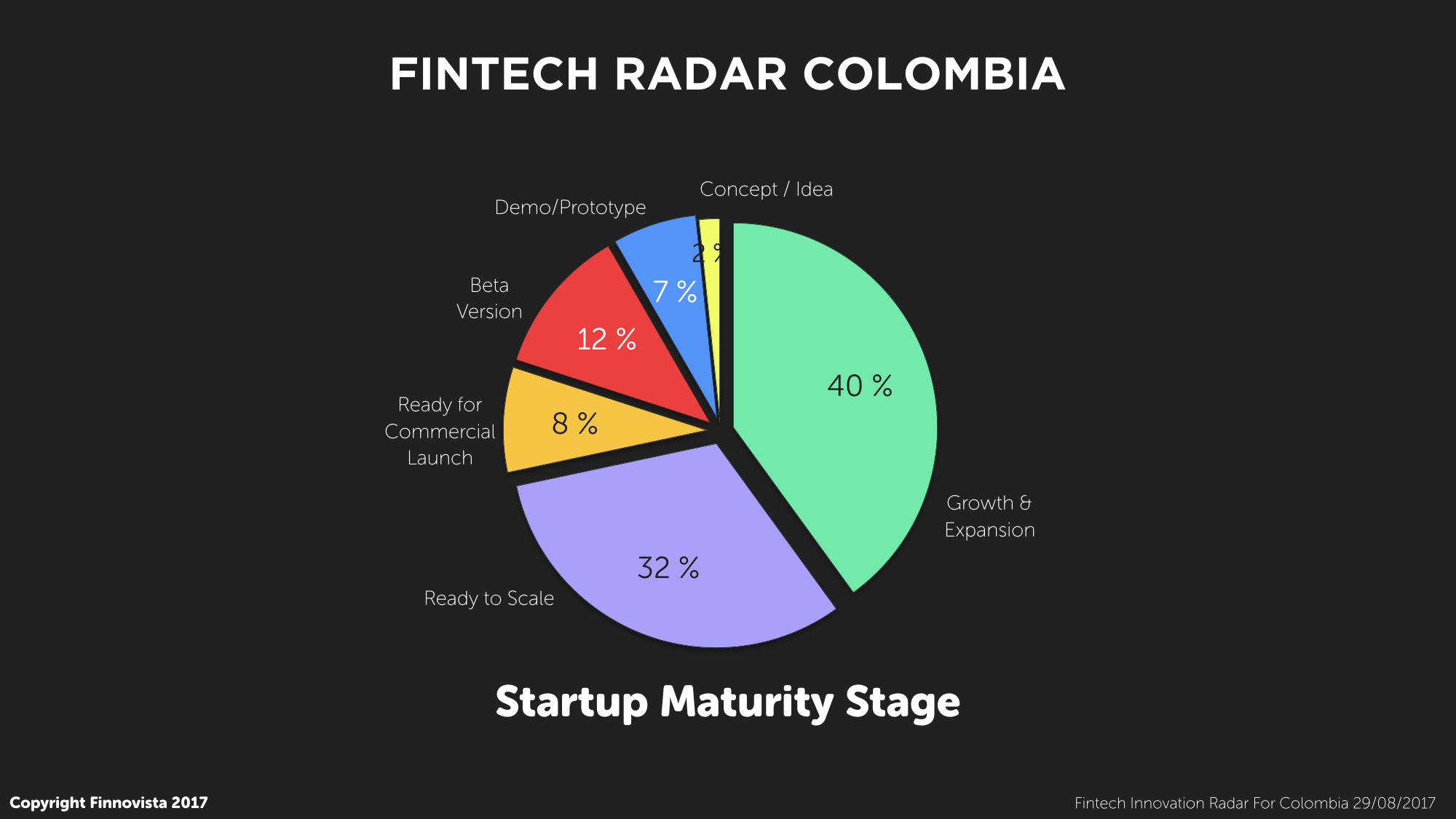 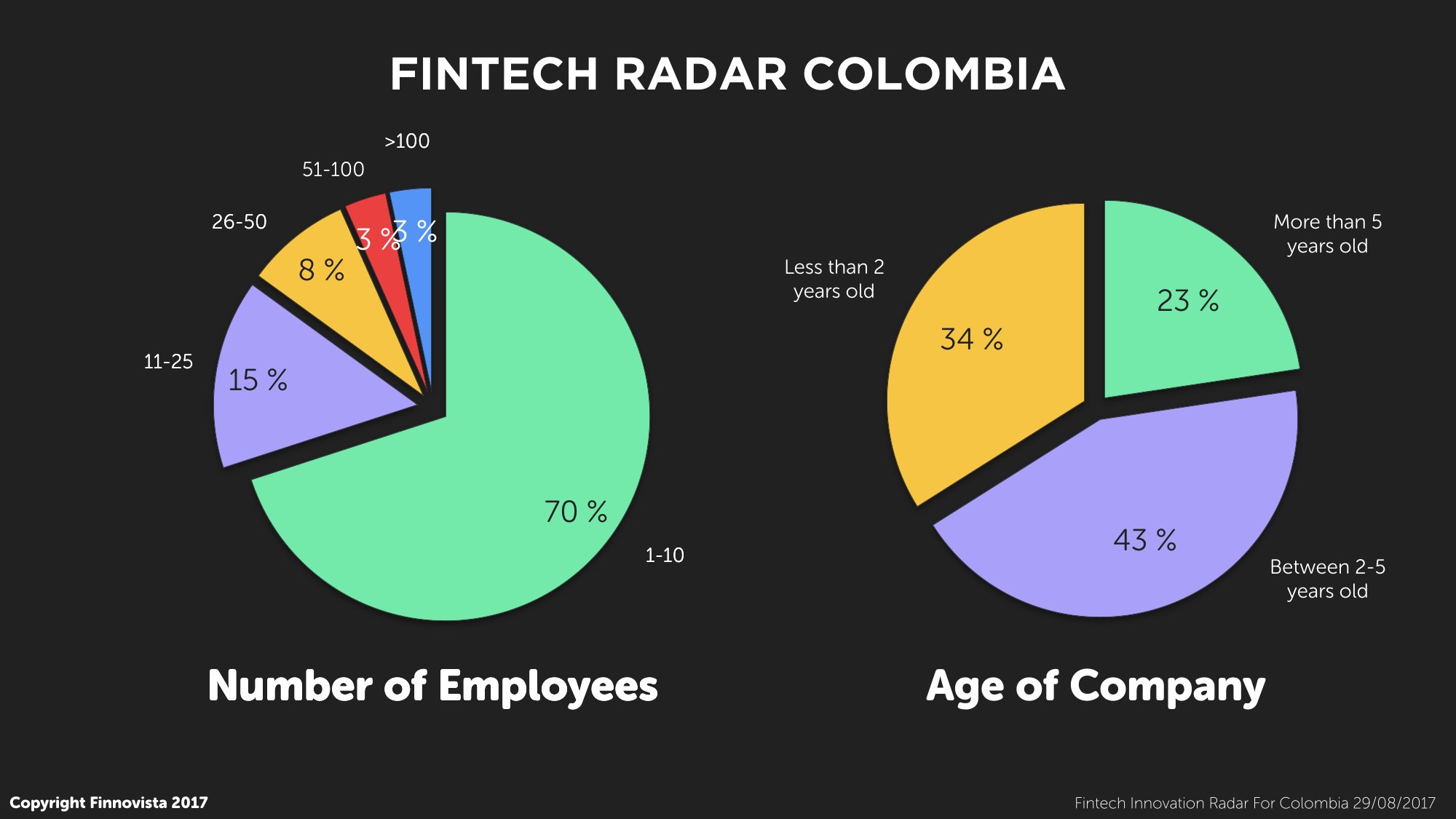 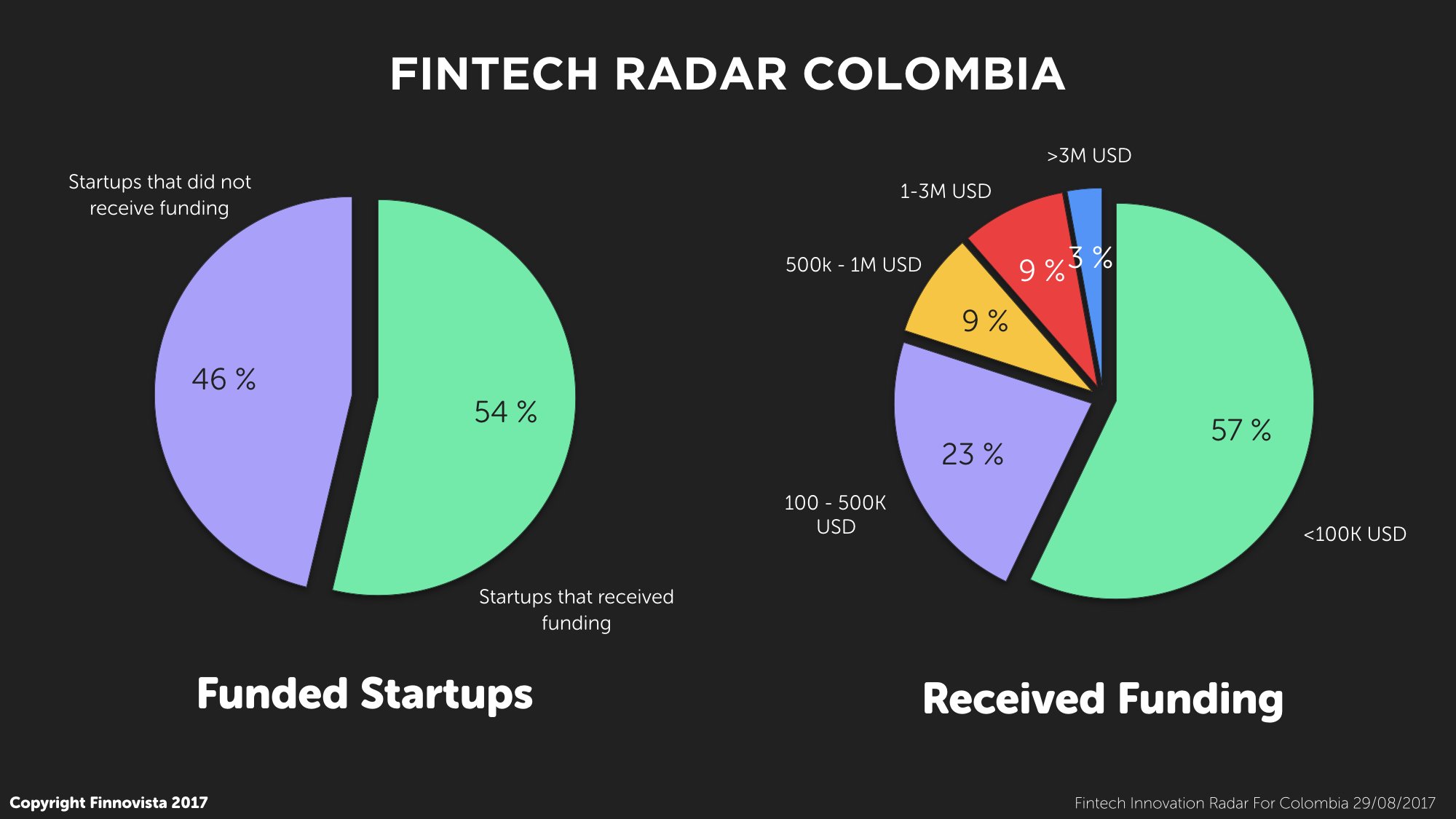 Colombia has been in the podium of the race for Fintech innovation in Latin America for some time, and in this new edition of the Fintech Radar Colombia we can see how the Fintech activity in the country is getting closer to the levels found in the main markets of the region, Mexico and Brazil. However, and as we also found in other markets, the main challenge for Fintech activity to consolidate in the country currently lies in building a clear and articulated regulatory frame, with specific rules for the sector that protect the public interest and consumers, at the same time it promotes investments in the sector.

In the case of Colombia, one year ago we saw how the Unidad de Proyección Normativa y Estudios de Regulación Financiera created a consultation document with regulation alternatives to one of the segments of the Fintech sector: the crowdfunding segment. The report highlighted that among the three regulatory trends in the sector (not regulating, introducing a flexible regulation or implementing a specific regulation), 45% of the countries assessed in the study followed the standard of a specific regulation for the crowdfunding segment, including the United States, United Kingdom or Spain among others. According to the study, countries that adopted a specific regulation resulted in an increase of the activity.

These figures reflect the importance of Governments and institutional players including Fintech in their agendas as a value element in order to achieve innovation and the development of the financial industry, as well as fostering collaboration among traditional financial industries that, otherwise, would lag behind in the race for innovation.

We keep missing in Colombia, as in the rest of Latin America, the direct investment in the traditional financial sector. In the rest of the world, up to 30% of the funding received by Fintech startups comes from financial entities (according to CB insights), while in Latin America we barely identified 2 or 3 deals funded by financial entities among the 50 most important deals in the region.

From Finnovista, we would like to thank you the following collaborators that have participated in this update of the Fintech Radar Colombia: Edwin Zacipa, Clementina Giraldo y Fernando Sucre.

Do you know about any other Fintech startup in Colombia that has not been included in our Fintech Radar?